Known for its Asiatic lions, Gir is a popular tourist destination in Gujarat and attracts thousands of tourists each year.

Known for its Asiatic lions, Gir is a popular tourist destination in Gujarat and attracts thousands of tourists each year. It is the only place where one can spot Asiatic lions in large numbers and at close proximity. If you are a wildlife enthusiast, this place is a must-visit.

A jungle safari in Gir is a must. If lucky, you might spot the mighty lions immediately. If you are less fortunate, you might want to book a couple of safaris during your stay so that you can maximise your chances.

Travelling with family members who might not be very excited about wildlife? Don’t worry. There are plenty of other places to visit in Gir. Whether you are looking for a clean beach or want a peek into history, there is something for every traveller.

Make a note of these eight places and make the most of your trip to Gir. All these places are located close to Gir and can be a part of your itinerary.

2. Daman and Diu Near Gir

A union territory in western India, Diu is a small island near Junagadh. It has a beautiful beach and there are many attractions including temples, a fort, and churches. The weather in Diu is charming and pleasant, and so it attracts a large number of tourists through the year. 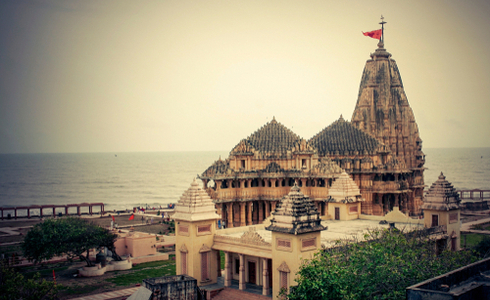 A famous religious place near Gir, Dwarka is located in Jamnagar. The major attraction here is a temple of Lord Krishna that was built in the 16th century. A flag is hoisted in the temple tower five times every single day – a sight you shouldn’t miss. Dwarka is considered one of the ‘Char Dham’ (four pilgrimage sites) in India according to the Hindu religion and is considered to be a holy city. It is one of the top places to visit in Gir.

There is a lighthouse located near Dwarka, which offers some beautiful sweeping views of the surroundings. Go there for the best sunset view.

This mountain is 1100 metres tall and is 5 km from Junagadh. There are numerous Jain temples at the top, built between 1128 and 1500. These ancient temples attract a number of tourists. To reach the peak, one has to climb 10,000 steps. The first Jain temples are located at 7,000 steps and a fair is held in the month of January and February.

If you are into birding, this is the place to be. This lake is a famous water reservoir located near Gir. It is frequented by water birds and other migratory birds. Some of the birds you can spot here are the pied woodpecker, black-headed cuckoo, and the common sparrow. With luck and a little patience, you can click some really wonderful pictures of birds.

A lot of rich history is associated with Gir. Located in Junagadh, Durbar Hall Museum near Diwan Chowk is a delight for history buffs. It preserves some rare items of the Nawabs, such as their armour, weapon, chandeliers, palanquins, and howdahs. You will also find a collection of silver articles, thrones, costumes, paintings, tapestries and silver articles. There are pictures of the royal family in a gallery. The museum remains open throughout the week from 9 AM to 6 PM. exploring it will take 2-3 hours. It is one is the best places to visit in Gir for people who like heritage and culture of the place. 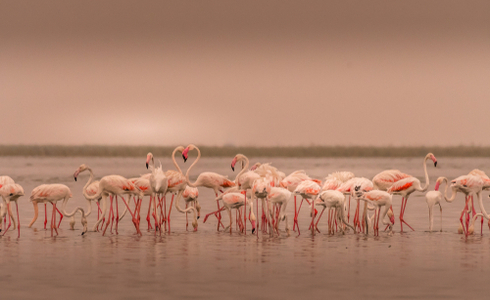 Dating back to 316 BC, the fort is said to have been built during the time of Chandragupta Maurya. It was abandoned for a very long time; when rediscovered it was covered by dense jungle. It is a now amongst the best places to visit in Gir.

Situated in Gir National Park, the dam is built over seven rivers that drain in this area. These rivers are Hiran, Shingoda, Godavari, Datardi, Macchundri, Raval and Saraswati. The dam is the lifeline of Gir and is a very serene place. You will get to see a number of birds and animals, including antelopes, crocodiles, and deer.

Plan a getaway with friends and family at Club Mahindra Gir Resort. It offers a perfect combination of adventure and leisure. You will never have to compromise as the spacious rooms are equipped with all modern amenities. So get ready to be pampered in the lap of luxury and enjoy a memorable family vacation.

Also get yourself a Club Mahindra membership and enjoy special offers and discounts on your bookings. Club Mahindra Gir Resort is the perfect place to relax and enjoy the beauty of the jungle. Check out the Club Mahindra reviews online to learn more!