The city of gardens is one of the top developed cities in India. The beauty of Bangalore (Bengaluru) is spellbinding. The city has its individualistic characteristics that can be experienced only by visiting the city and its surroundings. The city is vibrant with many things to do in Bangalore.

Let’s get one thing straight - there are incredibly many things to do in Bangalore. You have Lal Bagh, Cubbon Park, Bull Temple, Vidyarthi Bhavan, Skandagiri hills, Wonderla, Nandi Hills, etc. that are inseparable from Bangalore tourism. But then again, there is much to explore in Bangalore. If you are looking for something atypical, then get ideas from this Bangalore travel guide of unique things to do in the city.

The globally popular megacity, Bengaluru, is known as the Silicon Valley of India. Not just a land of industries and apartments, it is a hill station developed over time into a modern settlement with many places to visit in Bangalore. The reason why it is home to so many natural places like lakes, hills, forests and waterfalls. Bangalore is the only megacity in India enjoying pleasant weather all year round. There are many things to do in Bangalore for a tourist, and there are plenty of Bangalore resorts too as mentioned in Bangalore travel guides.

The capital of Karnataka is known for the choices it offers to tourists with many places to visit and things to do in Bangalore. The city offers its visitors abundance choices in food with many restaurants in Bangalore. There are unlimited places for shopping, beautiful sanctuaries to explore, and experiences of the amped-up city life here.

Being a hill station, Bangalore enjoys pleasant weather with a moderate climate throughout the year. While the city can be visited at any time of the year, the months from October to February is the best time to visit Bangalore. The duration witnesses the highest tourist inflow as the weather becomes even more pleasant during the time.

October to February: Months between October and February constitutes Winter season in Bangalore. The lowest temperature in the city is not that low being 10°C. Things to do in Bangalore include visiting lakes and gardens, sightseeing architectural marvels, and going for outdoor activities. October to February is a good time to go on various getaways from Bangalore as well. 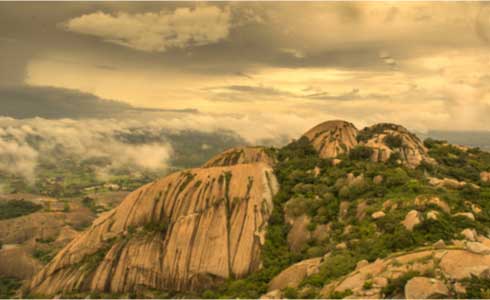 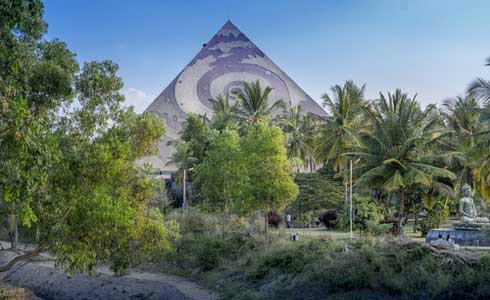 How To Reach Bangalore

If you intend to reach Bangalore by train, you have two terminals as your options—Bangalore Railway Station and Yeshvantpur Railway Station. The two railway stations connect Bangalore to the rest of the country.

Bangalore Railway Station is in the heart of the city. Trains from all over the country arrive in Bangalore. There is Karnataka Express from Delhi, Mysore Express from Chennai, and Udyan express from Mumbai that covers transportation from many other major cities as well. A ride from Yeshvantpur Railway Station to the city of Bangalore takes around half an hour.

Bangalore city is well-connected with major national highways with other cities in India. Bangalore bus stand runs several buses to major South Indian cities. Buses from the neighbouring states run to and from Bangalore. So, how to reach Bangalore should not be a problem.

Unique Things to Do in Bangalore

The forest of Turahalli is the last surviving forest in the city. It is located off Kanakapura Road near Banashankari. Turahalli Forest is full of small hillocks, dense vegetation, and narrow trails. While vehicles have been banned inside the forest, the area is a favourite spot for cyclists. Numerous outdoor activities like hiking and rock-climbing are possible here.

Just outside the city in Kethohalli village lies a 400-year-old banyan tree, locally known as Dodda Alada Mara. Spread over an area of 250 metres, several roots hang down from the small and large trees. The enormous roots of the tree form a maze. It is the second-largest banyan tree in India. See the uniqueness and majesty of nature by visiting the Big Banyan Tree. The tree is worshipped by locals and is considered as the holy trinity of Gods.

Fly like a bird in the blue skies by doing Parasailing at Jakkur Aerodrome. Watch the whole of Bangalore city from the top. It is one of the most unique things to do in Bangalore. You can partake in many other exciting and engaging activities like a ride in an aircraft, or microlight flight over the city.

Experience flying an aircraft real time with Flight 4 Fantasy. The classic flight simulator with 737 cockpits and friendly instructors is bound to bring thrills out of you. Also, play games, eat food at one of the best restaurants in Bangalore, and have fun at Lazer Castle.

Visit the 110-year-old wrestling pit located in the middle of Shivajinagar. It is one of the fewer numbers of places where Kushti is still practised. In the afternoons, the akhara turns into a restaurant, serving biryani and kebabs. 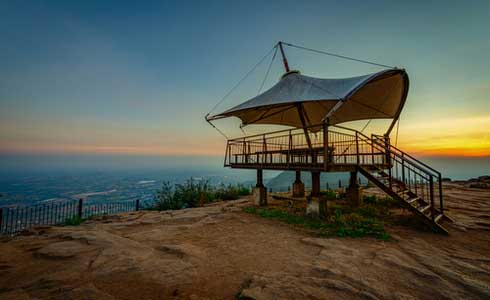 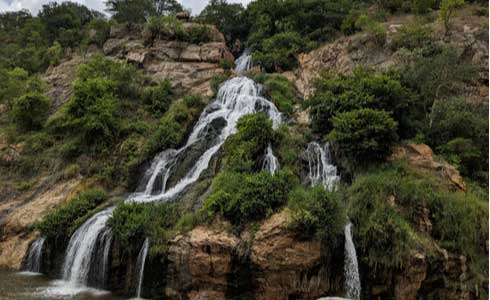 Bangalore has many Go Karting places. The four-wheeler vehicle at different places comes in varied shapes and sizes. You can Go-Kart at places like Raceway Motorsports and Play Arena.

Pyramid Valley is an international meditation center located in Kebbedoddi just outside the city. The center houses the world’s largest meditational pyramid known as Maitreya-Buddha Pyramid. More than 5000 people can meditate at a time inside the 102 feet tall pyramid. The center is constructed in a lush green valley, also having streams and hills to relax and meditate.

The place is also known as Karadibetta for having lots of bears. Among the many trekking options in Bangalore, Maribetta stands out for its immaculate beauty. The view from the peak is gorgeous. Day trekking your way to the peak of Mariibetta Range is one unique experience you can have in Bangalore. Indulge in an aqua adventure at Maribetta. The scenic place with its sunlight elegance under the lush green shadows is sure to mesmerise you.

Nandi Hills is located 60 km away from Bangalore. Enjoy camping at a beautiful spot in the foothills of the hills. The surrounding of the place is blessed with the lush greenery of hills. Enjoy nature’s beauty at best, admire scenic views from the top, and sit by the bonfire in the night.

South Bengaluru is the heart of Bangalore tourism and a walking tour there would bring you closer to the city. See the ancient Bull Temple, the Ramakrishna Ashram and Gandhi Bazar. Have dosas in Vidyarthi Bhavan and explore Indian Institute of World Culture on BP Wadia Road. Also, visit the amazing Bugle Rock, JP Nagar and Jayanagar.

BluO is not just any other bowling alley but the best bowling alley in India. The experience of bowling in the amazing ambience here is fantastic. It is a great place to hang out with friends. Bowling at Blu-O would be a fun thing to do in Bangalore for anyone.

Malleshwaram is one of the oldest localities of Bangalore known for its history. There are many places to visit on Malleshwara 18th and 15th Crossroad. You have a 17th Century Old Kaadu Malleshwara temple, Sankey Tank, Sri Nandishwara Teertha temple, Sri Gangamma Devi temple, Halli Mane, Orion Malls, and the Malleshwaram market here.

Climb the utility building via the dim staircase and reach to the top of the building. Bangalore looks remarkable from there. The building once was the tallest complex in Bangalore.

Nothing more unique than a night trek in the darkness. Trek to the top of Savandurga and enjoy a bonfire. Savandurga is one of the largest monolithic rocks in Asia. At 1226 meters, the hill is shaped by two other hills called Karigudda and Biligudda, meaning black hill and white hill respectively. Discover, along the way, nocturnal appeals of the trek.

The experience of Trash Trial is so very unique. Have a one-day tour of ‘know your bin’ and know what, where, and how the garbage of Bangalore is handled. Where the trash is dumped, how it is segregated, recycled, and things about garbage management of Bangalore. Well, things to do in Bangalore can’t be more unique.

The falls on the banks of the river Arkavati is located 100 km away from Bangalore. The narrow path of heavy rocks brings you to the mesmerising waterfall in the middle of the terrain of thick forest. The wonderful waterfall is named after a tribal couple—Chuncha and Chunchi. It is a famous picnic spot around Bangalore.

Royal Enfield administers factory tours for bike enthusiasts who wish to know about the manufacturing of the Royal Enfield classics. If you are not a bike enthusiast, experience something out of the world on this tour. It is conducted on second and fourth Saturdays.

#18 Visit a Magazine Store with Cats

A must-visit place for a cat lover, magazine store on Brigade Road is all about cats and shopping. The store hosts you with 19 little cats. Usually, people come to see the cats and end up making a purchase. Also, here you can find magazines from around the world.

RK Dosa Camp is a must-visit place for dosa lovers. You haven’t really eaten dosas in Bangalore until you have tried the 4-foot long dosa at RK Dosa Camp.

Guhantra is the Cave Resort regarded as the first underground resort in India. The resort offers alluring sights of nature. Get away from the bustling noise of the city and rather explore beautiful Rangamandapa, have wine at Madhushala, and indulge in spa therapy at Agasthya Kuteera. Also, have amazing food at Sambhojana, one of the wonderful restaurants in Bangalore.

Covered in many movies, Shettihalli Church has a history attached to it. The church was built in the late 18th century with French Architecture. Remarkable once, the church is now in ruins. It is a nice place to visit with friends.

At the heart of South India, the cosmopolitan city is a world city with pleasant weather, people, and hangouts. Also, many Bangalore resorts offer great hospitality. The diversity Bangalore carries with its efficacious crowd is extraordinary. A foodies’ paradise, a divine place for temples and a land of opportunities, Bangalore is the land of many unique things to do as well.

Mahindra Holidays & Resorts India Limited (MHRIL), India’s leading player in the leisure hospitality industry, offers quality family holidays as also stated by Club Mahindra Reviews, primarily through vacation ownership memberships. While Club Mahindra is the flagship brand offering Club Mahindra Membership, the other brands offered by the company are –Club Mahindra Resorts Fundays and Svaastha Spa. As on Mar 31, 2019, MHRIL has 100+ resorts across India and abroad and its subsidiary, Holiday Club Resorts Oy, Finland, a leading vacation ownership company in Europe has 33 resorts across Finland, Sweden and Spain. Visit us at www.clubmahindra.com