Chennai is one of the more vibrant cities of India. The city has a plethora of beautiful beaches. Among the top things to do in Chennai are shopping and strolling on the beaches. The capital city of Tamil Nadu also has museums, monuments, art galleries, historic places, and parks. Known as the 'Detroit of India' for the many automobile industries located here, Chennai is also a premium Medical tourism centre in India.

In adventure activities, you have paragliding, parasailing, scuba diving, trekking, and hiking. Again, the many lakes in the city allow you to indulge in a pleasing boating experience. Skim through this little Chennai travel guide before you go to Chennai.

Madras came to form in 1639. Before 1639, the villages like Mylapore, Tiruvanmiyur, Tiruvallikeni, and Tiruvottriyur existed separately, which with time have become parts of Madras. It was officially named Chennai in 1996.

The region was influenced by great dynasties like the Pallavas, Pandyas, Cholas, and also the Vijaynagar Empire. Before 1639, Portuguese and Armenian traders lived in the present-day Chennai. Britishers came in 1639 and built the factory-cum-trading post by 1640. They invited the local cotton fabric weavers and merchants to habitat near the fort and developed the city as a trading port, administration hub, and naval base. The Fort St. George factory was recognised as a presidency in 1652. By 1801, the English became masters of southern India with Madras as their capital. Soon the city became one of the most important cities in India.

Chennai is considered as the doorway to South India. The city has a distinctive culture that needs exploration. The city presents to the world the legacy of superb cultural heritage absorbed in its people, cuisines, music and dance forms, and fine arts. The reason why Chennai tourism is in demand.

Being a cosmopolitan city, Chennai is the melting pot of diverse cultures. The festive celebrations that come under the best things to do in Chennai are a combination of fun and enthusiasm. All in all, the city is a remarkably important part of Indian heritage. 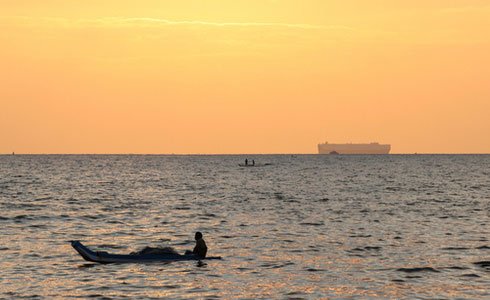 Many transportation options are available to Chennai. So, you don't have to find how to reach Chennai. While the city experiences tropical weather throughout the year, the best time to visit Chennai is anytime from November to March. It is the time when the city is pleasant and refreshing as ascertained by Chennai travel guides. Again, around the start of the year, Pongal is celebrated with much enthusiasm.

November – March: The duration constitutes winter season in the city—the best time to visit the tropical city. The temperature is around 22 Degree Celsius, and cool breezes from the sea provide relief even during the daytime.

Top 10 Things To Do In Chennai

The official residence of the Nawabs of Carnatic in the past days, Chepauk Palace is constructed in Indo-Saracenic style of architecture. It comprises of two blocks — Kalas Mahal and Humayun Mahal. While the authorities have taken steps to restore Humayun Mahal, Kalas Mahal is going to house the National Green Tribunal, Southern Bench. The palace is the former residence of the nawab of Karnataka. The buildings of the palace are regarded as the most attractive buildings of the British period. When visiting Kamarajar Salai, you are bound to notice the majestic red building housing Public Works Department office. There is University Senate House in Deccan Muslim style of architecture. The palace also has Victoria Technical Institute and High Court buildings built in Indo-Saracenic style. Chepauk Palace is one of the top places to visit in Chennai.

While touring Chennai, visiting the gorgeous Pulicat Lake is mandatory. The lake is spread over an area of around 160 sq km and surrounded by colonial buildings. Pulicat Lake is the second largest saline water lake in the country. The lake is located about 60 km from Chennai in Tiruvallur District. Also known by the name Pazhaverkadu, the lake lies on the Barricade Island of Sriharikota at the border of the states of Andhra Pradesh and Tamil Nadu. It is also known as 'Pulicat Lake Wildlife Sanctuary'. Its tranquil and calm surroundings offer a blissful experience to visitors. Watch flamingoes, storks, kingfishers and undergo lake activities. Beautiful migratory birds can be witnessed between November and March. More than 20,000 migratory birds come to Pulicat Lake for breeding. The lake attracts several tourists in Chennai and visiting it is one of the top things to do in Chennai.

The beach is a part of VGP Universal Kingdom, a famous amusement park on East Coast Road. The beach is deemed as one of the cleanest beaches in Chennai. It is one of the best destinations to visit with your family. While the beach consists of smooth and silver sand, the waves and wind add to the charm. You can also take water-based rides here like you can go surfing. The beach has a beautiful backdrop of clear waters. You can bathe and swim in the freshwater shower. Due to  its pure beauty and landscape, the beach is known as one of the best beaches to visit in Chennai. It is frequently used for shooting movies. People come for their morning walks and even spend time with their families and friends in the evening on VGP Golden Beach. Children can either take a dip in the sea, build sandcastles or look for sea jewels on the shore. Again, as this beach is a property of VGP Universal Kingdom, you and your kids have many fun activities to partake in here. The theme park is quite enjoyable for the visitors. All in all, the place is an excellent family destination coupled with adventure rides for adults as well.

The calm Akkarai Beach, located in Injambakkam has sand, sea and abundant natural greenery. The coastline of Akkarai Beach begins from Ennore and extends until Uthandi, giving you a beach option different from Marina and Elliot's beach. On the beach, there are nicely constructed pavements, comfortable seats, lush green lawns and a playground for children. The golden sand of the beach is soft enough for your resting feet. Also, enjoy sunbathing while your kids play in the playground on the beach.

Chennai has more to offer than just old temples and beautiful beaches. The cosmopolitan city also offers parasailing—one of the best things to do in Chennai. The adventurous water sports is sure to take your breath away. Beaches like Marina Beach, Nettapakkam Beach, and Covelong Beach offer parasailing in Chennai. 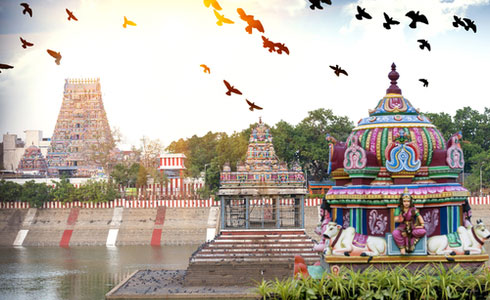 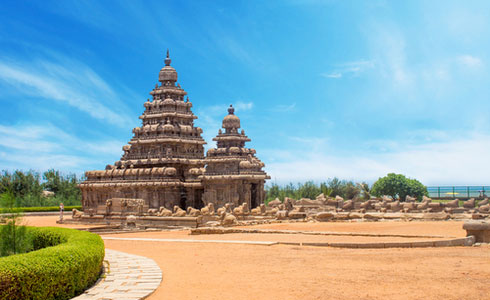 Against the British-built Pantheon Complex lies the Chennai's best museum. The biggest highlight of Government museum is the Bronze Gallery that has a superb collection of bronzes of South India. The bronzes from the 7th-century Pallava era to modern times can be discovered here. Some of the impressive bronze pieces are Shiva's Nataraja and a Chola-era bronze of Ardhanarishvara. The Archaeological Galleries Building 1 showcases major South Indian periods from 2nd-century BC Buddhist sculptures to the 16th-century Vijayanagar work. Building 2 of the Anthropology Galleries showcases South Indian history from prehistoric times. You can also catch sight of the tiger-head cannon captured from Tipu Sultan.

#7 Frolic on the Marina Beach

The second largest beach in the world is well known for its amazing view and calm surroundings. You'll see people playing cricket, flying kites, running fish markets and families relaxing on the beach. The tranquil beauty of beachfront and the rolling waves of the ocean attracts almost everyone visiting the city. Swimming is not recommended on the beach because of strong ocean currents. The beach has a coastal line of around 13km. In the southern part of the beach, the very popular Madras Lighthouse offers a panoramic view of the beach and the city as a whole. It is the only lighthouse in India with a lift. Kamarajar Salai, at the edge of the beach, has a line of Indo-Saracenic buildings such as Presidency College and the Senate House of the University of Madras.

Spread across 15 acres of land, Choki Dhani is a park that is themed on the culture and traditions of Rajasthan. It is a masterpiece of art and design and one-stop destination for both fun and food. The Chokhi Dhani park brings Rajasthani heritage to life. The attractions and elements of ethnic Rajasthani culture and tradition will spellbind you. The experience starts with a welcome tilak synonymous with the Padharo mahre des Rajasthani hospitality. The village theme park has many other things like village bazaar, animal rides, bio scope, folk dances, mehendi art, village-style photo studio and open lawns. It is enjoyable to have a heart-warming Rajasthani thali in Chennai.

Mylapore is one of Chennai's most lively neighbourhoods. Kapaleeshwarar Temple is the Hindu temple in Mylapore. It is believed to have been built after Portuguese destroyed the place in 1566. The Chennai's most impressive temple displays the primary architectural elements of many Tamil Nadu temples like rainbow-coloured gopuram and pillared mandapas. The story of how an angry Shiva turned Parvati into a peacock and ordered her to worship him at Kapaleeshwarar Temple to regain normal form is shown at the west end of the inner courtyard. A shrine commemorates the event at a spot outside the northeast corner of the central block. The name ‘Mylapore’, meaning, 'town of peacocks' also comes from this story.

Mahabalipuram is a weekend getaway near Chennai. While the town came to form in the year 1827, it has a history back from the time of Pallavas. The city is the centre of history, culture, and architecture. The experience of driving to the place via the East Coast Road is thrilling. The town is a historical venture that attracts tourists for its ancient architecture. The build of the city is the most exciting part. The place is declared as UNESCO World Heritage Site for its architectural wonders. There are many temples and monuments in the town. Witness the architectural wonders exploring Arjuna's Penance, Pancha Rathas, and the Shore Temple. Also, visit the fantastic Seashell Museum in Mahabalipuram. While on a visit to Mahabalipuram, you can also visit ancient temples having Lord Krishna and other Gods and Goddesses as deities. You can also visit temple caves. Among other attractions in Mahabalipuram is Mahabalipuram Beach. The beautiful beach also has religious importance.

The city and surrounding getaways of Chennai are undoubtedly amazing as you must have figured out from the above list of top 10 things to do in Chennai. As you know how to reach Chennai and that Chennai tourism is famous for the city's architectural beauty and beaches, visit Chennai. When it comes to hospitality and food, Chennai has much to offer. Chennai resorts are well-known for their services and amenities. The restaurants in Chennai are also well known. Stay at Chennai resorts and explore the restaurants in Chennai on your next trip. Visit Chennai and get ready to experience incredible architecture, beaches, and culture.