Another theory goes that the name of the region came from the British word ‘Carnatic’ which described the region beyond the south of the Krishna River.

The name Karnataka is said to be derived from the Kannada words ‘Karu’ and ‘Nadu’. ‘Karu’ means ‘black’ which refers to the rich black cotton soil that the Bayalu Seeme region abounds in, to this day, and for which the entire State is famous. ‘Nadu’ refers to ‘Land’. Another theory goes that the name of the region came from the British word ‘Carnatic’ which described the region beyond the south of the Krishna River.

Karnataka is the sixth largest State in India. Geographically, it is bordered by five States – Maharashtra, Telangana, Kerala, Tamil Nadu and Andhra Pradesh. On the West, lies the Arabian Sea. Its strategic location ensures that Karnataka is widely accessible from all sides, by land, water, road and railway. The State is rich in rivers and tributaries, the main ones being the Krishna River and the Bhima, Malaprabha, Tungabhadra and Ghataprabha tributaries in the North. In the South are the Kaveri and Sharavathi, with the Shimsha, Lakshmana, Thirtha, Hemavati and Kabini tributaries in the South. This dense network of rivers provides ample water for agriculture and irrigation throughout the State, before flowing into the Bay of Bengal.

The State was ruled by some of the most powerful empires in India. Some of the oldest civilisations here can be dated back to the Paleolithic Era. Excavations into many parts of the State have unearthed hand axes, cleavers and other tools that point to Neolithic and Megalithic societies. Some gold that dates back to the Harappa Civilisation is also said to originate from Karnataka.

Karnataka was an important political capital for successive empires that ruled it. These included the Nanda Empire, Mauryan Empire, Satavahana Empire, Kadamba Empire, Western Ganga Empire, the Badami Chalukya Rulers, Rashtrakuta Empire, Western Chalukya and Hoysala. The Western Chalukya Rulers brought out a unique style of design and architecture in Karnataka, and encouraged a bold new literature as well. The Hoysalas were instrumental in Karnataka developing a unique design ethos for its temples and major public buildings, as well as poetry and verse in a distinct metre. In the 17th Century, the region fell to the Mughal Empire, with the Bijapur Empire ushering in a unique Mughal style of architecture, but also bringing in a period of plenty for the State. Later, the region was ruled in turns by the Marathas, Hyder Ali from the erstwhile Mysore kingdom and the British.

Culturally, too, Karnataka is one of the most interesting States in India. When it was still ruled by powerful dynasties that encouraged art, the bards and thinkers of the time were known to launch various literary and cultural movements that united society and provided a rich musical and artistic platform to all. To this day, the State is known for contributing a lot to the Hindustani and Carnatic music traditions.

While Kannada and Tulu are the most widely spoken languages here, other languages spoken by many residents include Malayalam, Tamil, Marathi, Konkani, Kodava, Urdu and Beari. Some of the only remote villages in India to speak Sanskrit are also located here.

Now that you know a bit about Karnataka tourism and rich history, let’s look at some reasons for why you should visit this State and the best things to do in Karnataka:

* Enjoy the vast coastline: The State’s huge coastline, known as the Karavali Coast, is hemmed in by the glorious Arabian Sea. There are some gorgeous beaches to visit, as also temples and monuments located in the area. Gokarna is a wonderful site to visit, with the Western Ghats on one side, and many opportunities to go sight seeing and indulge in adventure sports.

* There are many heritage sites to visit: Given its rich political and cultural history, it is little wonder that Karnataka is a veritable treasure trove of heritage buildings, ruins, temples, forts and other monuments. Visiting these will give you perspective on how ancient civilisations lived here, and how modern societies prospered in the later years. From the ruins of Hampi to the 12th century Belur and Halebidu ruins, there is a lot of historical ground to discover.

* Unique folk art and festivals: Like mentioned above, Karnataka has a rich tradition of written and performing art. There are centuries-old dance and folk music traditions practiced here even today. The most famous dance form from this State is Yakshagana, which combines theatre with music and dance, and the tribal art form of Dollu Kunitha. The State is also famous for its vibrant Dussehra and Makar Sankranti celebrations.

* The most interesting choice of food: One of the best things about Karnataka is that its cuisine is diverse from region to region. Recipes here are distinctly divided into Udipi, Karavali, Kodagu, North Karnataka, South Karnataka and Navayath cuisines. Dishes like Dharwad pedha, Mysore masala dosa, Mysore Pak and bisi bele bhaat all originated here. From lightly spiced to sweetly alluring, you will find a wide array of local food in the best restaurants in Karnataka.

The Best Tourist Places in Karnataka: Here’s Our List

Now that you have an idea of what Karnataka is like and why you need to visit it, you should start compiling a list of the best tourist places in Karnataka for your holiday. Let’s go with these to get you started:

1 Mysore: The historically and politically important city of Mysore is one of the best tourist places in Karnataka. It is located about 139 km from Bangalore and is easily accessible by road from many other cities in the State. It is the State’s second largest city and was ruled by the Mysore Maharajas till 1947. Full of charm and ancient palaces, temples and old monuments, Mysore is an important site to visit and a gorgeous one, too. Be sure to visit Mysore Palace when you are there.

2 Coorg: Picturesque Coorg is a hill station and one of the best tourist places in Karnataka. Coorg district has its headquarters at Madikeri, where all the train heads and bus stops are located. It is located over 1500 metres above sea level and enjoys a salubrious climate all year round. Be sure to visit in the summer and the start of winter, since the temperatures are most pleasant during this time. 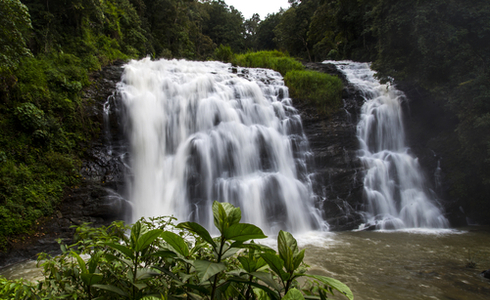 3 Chikmagalur. Another famous hill station in Karnataka, Chikmagalur has been the site of many a holiday and film shoot over the decades. The hill station is located in the famous Deccan plateau, and the city is mapped in the Malnad region. The region marks the start of the Western Ghats, and is full of natural beauty. The famous Yagachi River also originates here. You and your family will love its peace and quiet, as also the lush green jungles and hills.

4 Hampi: You cannot visit Karnataka without taking a short detour to Hampi first. The ruins of Hampi date back to the 6th century, and are part of the flourishing ancient city located at the banks of the Tungabhadra. It is designated as a World Heritage Site by the UNESCO, and is mapped inside Vijayanagara city, which was its erstwhile capital in its heyday. Do visit the ruins to see how ancient civilisations did their town planning and lived their daily lives. 5 Bengaluru: Chances are that your flight or train will land in Bengaluru when you visit Karnataka. So why not take two days out of your schedule to see this capital city and one of the best tourist places in Karnataka? It is the fifth largest city of India, and one of its most cosmopolitan ones. It is also unusually blessed with a much better climate than the rest of Karnataka. Known variously as the IT City or Garden City, it is a prominent hub of international business, education, housing and public infrastructure.

6 Udupi: Most of us are familiar with the term ‘Udupi’ owing to the idlis and dosas we love gorging on, and which are primarily the fare of this region. Udupi is an important tourist place in Karnataka, and one of its best temple towns. Pilgrims from all over the country flock to its famous temples, while the beaches here are also quite beautiful to spend a day at. 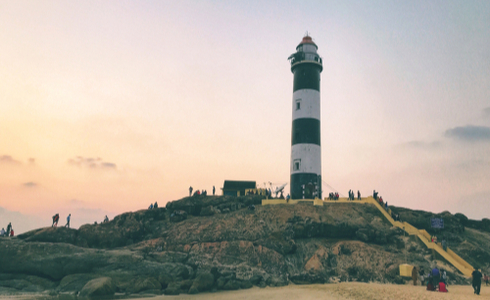 7 Murudeshwar: Those with a religious and spiritual bent of mind should certainly visit Murudeshwar, the beach pilgrimage town that scores of devotees flock to every year. It is located in the Bhatkal district and is located between the Arabian Sea on one side and the Western Ghats on the other. You will also find many beach resorts here, as also some of the prettiest beaches and inlets to picnic at.

8 Bandipur National Park: Located about 80 km from Mysore city and easily accessible from Bengaluru and Ooty, this area is one of the most important tourist places in Karnataka. It is a preserved National Park in the Chamarajnagar District near Tamil Nadu, and one of the State’s top attractions for amazing diversity in both flora and fauna.

9 Gokarna: Gokarna is both a temple town and a beach destination. You will love its long stretches of beaches, as well as the famous Mahabaleshwar Temple where the legendary Atmalinga is situated. This Atmalinga was said to have been gifted to Lord Ravana after a long penance to see Lord Shiva. The lingam was a powerful weapon that Lord Shiva instructed Lord Ravana not to keep on the ground – but the latter could not carry it for very long and placed it on the ground. Here, it got rooted to the ground and could not be picked up again!

10 Dandeli: If you want a spot of adventure and outdoorsy fun on your holiday, do visit Dandeli for trekking and adventure sports. The gorgeous locales and wild backdrop make for good river rafting, rock climbing and trekking sites. You will also love the dense jungles here, as well as the Dandeli Wildlife Sanctuary located in the middle of the forest.

Where to Stay in Karnataka
You can have your pick of Karnataka resorts on your holiday, but we recommend the Club Mahindra properties at Madikeri and Virajpet, both at Coorg, and the Vijayashree Resort and Heritage Village at Hampi. All three resorts feature top class amenities and well-appointed rooms with scenic views all around. Conveniently located and outfitted with every convenience you require, you will love the resorts, their in-house restaurants, activity zones and locations close by to explore on foot. When it’s Club Mahindra, it’s a great vacation all around!

About Mahindra Holidays
Mahindra Holidays & Resorts India Limited (MHRIL), India’s leading player in the leisure hospitality industry, offers quality family holidays as also stated by Club Mahindra Resort Reviews, primarily through vacation ownership memberships. While Club Mahindra is the flagship brand offering Club Mahindra Membership, the other brands offered by the company are – Club Mahindra Resorts Fundays and Svaastha Spa. As on Mar 31, 2019, MHRIL has 61+ resorts across India and abroad and its subsidiary, Holiday Club Resorts Oy, Finland, a leading vacation ownership company in Europe has 33 resorts across Finland, Sweden and Spain. Visit us at www.clubmahindra.com