Hampi or Hampe, also known as the Hampi Group of Monuments, is a UNESCO World Heritage Site in India's east-central Karnataka. It is the historic Vijayanagara Kingdom's lost capital, with a plethora of awe-inspiring temples. Each of the Hampi temples has its own significance, and the majority of them were constructed as per Hindu tradition.

Between the 14th and 17th centuries, Hampi was the capital of the Vijayanagara Kingdom. Trade flourished, and the rulers lavished their wealth on the construction of Hampi's temples and royal enclosures.

Hampi, now in ruins, gives us a glimpse into the glorious era of the Vijayanagara Empire more than 600 years ago. Over the years, tourists and visitors have flocked to this region to discover its rich history, stunning art, and picturesque scenery.

Here are the 5 most magnificent temples in Hampi that you must see:

Vijaya Vittala Temple is the epicentre of Hampi's attractions. It was established in the 15th century during the reign of Devaraya II, one of the Vijayanagara Empire's monarchs, and is dedicated to Vittala, Lord Vishnu's incarnation. The temple is nestled near the banks of the Tungabhadra River in Hampi's northeastern region. The workmanship of the artisans of the Vijayanagara Empire will spellbind you once you enter the complex. The Stone Chariot and the intriguing Musical Pillars are two of the temple's most famous stone structures. The cause for the pillars making rhythmic music is unknown, yet they continue to captivate tourists worldwide.

The oldest and most important temple in Hampi, Virupaksha Temple, was established in the 7th century AD. Dedicated to Lord Virupaksha, an aspect of Lord Shiva, the temple walls feature various inscriptions about Lord Shiva engraved in the 9th and 10th centuries. Built in the South Indian style, the temple contains large towers or gopurams that serve as doorways to the inner sanctums. The gopurams lead to numerous internal hallways and halls, all of which are ornately carved with stonework. Every year in February, when the annual chariot festival is held here, Virupaksha Temple lures numerous visitors. The Hemakuta group of temples is a collection of ancient temples in Hampi's Hemakuta Hill. Although built in the pre-Vijayanagara and Vijayanagara periods, the architecture of the Hemakuta complex of temples atop Hemakuta Hill is significantly different from the traditional Vijayanagara style. The Hemakuta temples are tiny three-chambered constructions with granite pyramid-like tops. Some of the temples on the hill's northern slope are built in the Trikutachala style of architecture, in which three shrines are arranged perpendicularly to one another and face a shared central hall.

Many of these temples have succumbed to the ravages of time, and others are now in ruins, despite efforts by the Archaeological Survey of India to restore them to their former glory.

One of the most important landmarks in Hampi's heritage city is the Sasivekalu Ganesha Temple. The inscription houses a massive statue of Lord Ganesha carved out of a single block of rock that stood around 8 feet tall and was erected in honour of King Narasimha II of the Vijayanagara dynasty. Lord Ganesha is noted in Hindu mythology for his fondness for food. As per Hindu mythology, Ganesha once ate a lot of food to the point where his tummy was about to burst. Having exhausted all other options, Ganesha grabbed a snake and tied it around his stomach to keep it from bursting apart. The snake tied around Ganesha's tummy, which can be seen on the statue, results from a mythical incident. Both the Sasivekalu Ganesha Temple and Lord Ganesha's statue are excellent examples of Indian sculpture. 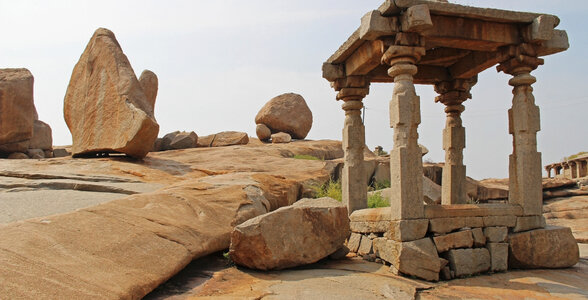 Lord Narasimha, one of Lord Vishnu's eleven avatars, is honoured at the Lakshmi Narasimha Temple. It is Hampi's largest monolith statue. During the time of King Krishnadevaraya, the magnificent temple was built in 1528 AD. Goddess Lakshmi was initially seated on Lord Narasimha's lap in the Lakshmi Narasimha Temple. However, Goddesses Lakshmi's idol was destroyed and removed after a Mughal raid in the 16th century. As a result, Lord Narasimha's idol has been known as Ugra Narasimha ever then, which is the most terrifying avatar of Lord Vishnu in the absence of Goddess Lakshmi. Ugra Narasimha is depicted as a half-lion, half-man sitting cross-legged with a ferocious face.

Hampi has attracted many national and international spiritual and historical buffs ever since the medieval ruins were found. Every inch of this place bears evidence of the magnificence it once exuded. 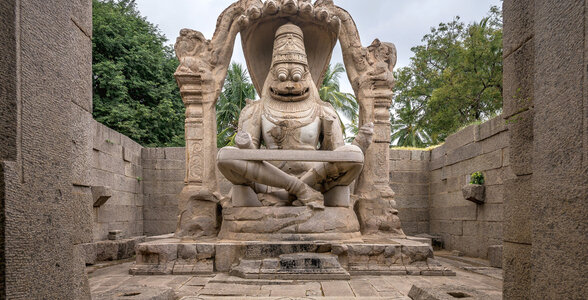 Visit Hampi to witness the city’s architectural splendour by exploring the prominent temples. Get to learn about the city's antiquities and edifices that date back to the Vijayanagara Empire and still stand as a testament to the glorious era.