Under the bright sun, like Vikings opposite each other, horn to horn seemed to get into a battle, but the two just glanced at each other and quietly lumbered. This is the beauty of the rare one-horned rhinos found in India. Co-existing with several other creatures belonging to the animal kingdom, they have less to do, but with, their own- selves. Let’s gather a bit more information about this world-renowned species that falls in the Vulnerable category on the IUCN Red List

Hunting practices and the depletion of the habitat which included the riverine forest and alluvial Terai-Duar savanna and grasslands, almost brought the species to extinction in the 20th century.

Decades of conservation took Rhinoceros unicornis to shift from endangered category to the list of vulnerable species. In the year 1975, there were only 600 rhinos that managed to survive in India and Nepal. Fortunately, with the strict protection, rules and regulations laid down by the wildlife authorities across India and Nepal, the numbers recorded have increased to around 3,700 in Nepal and India. This rare species has been brought back from the brink of extinction by rigorously tackling facets of wildlife crime like poaching, trafficking, and buying. 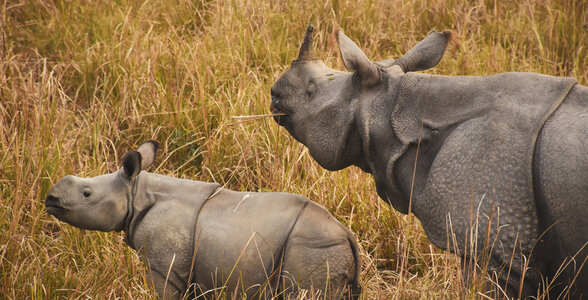 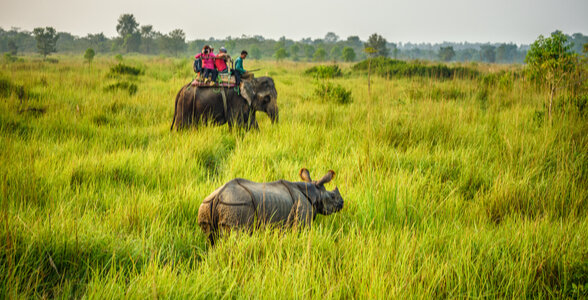 LOCATION: found in India and Nepal, predominantly in the foothills of the Himalayas. In early times they roamed free in the forests and floodplains alongside the Ganges, Brahmaputra, and Indus River valley.

HABITAT:  are semi-aquatic and usually dwell in riversides, swamps, and forests.

SKIN: possess ashy grey, hairless skin that develops thick folds, that resembles armour plating. The skin helps in thermo-regulation, which means that the animal can regulate its body temperature in varying weather conditions.

THE HORN:   a greater one-horned rhino has a single horn 8 to 24 inches (20 to 61 cm) long which weighs up to 3 kg. The structure of the horn is similar to the hooves of a horse, and can re-grow if broken.  The rhinos use the horn to search for roots and other types of food.

TERRITORIES:  males usually stay solitary except the females who tuck along with their young ones. The females have overlapping territories that depend upon the availability of food and other resources. Males have loosely-defended territories, and they fight violently for favored routine areas.

SEXUAL MATURITY: females at the age of 4 begin to breed while males become sexually mature at 9 years of age. 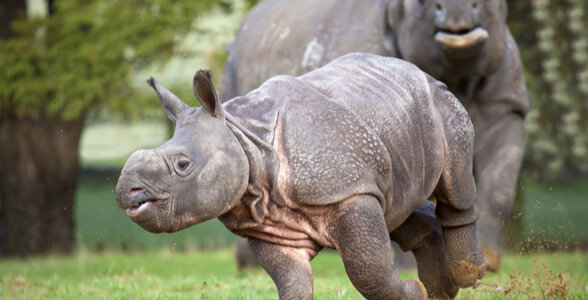 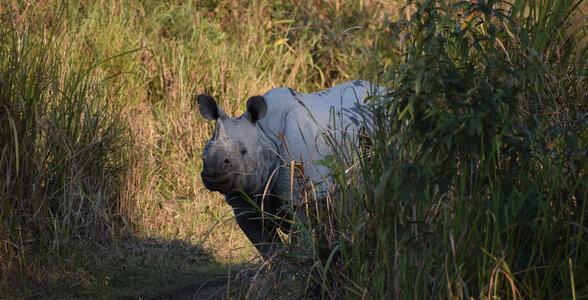 RHINOS HAVE POOR VISION – Rhinos are short-sighted as they are unable to see static objects at a distance of 30 m. They have a strong sense of smell and can hear well.

Rhinos are good at making funny sounds and are adept at creating 12 different types of sounds. They make trumpet calls and growl during confrontations. They snort in anger and make alarm calls through sneezing. They scream when they are scared, and mmwonk when relaxed.

RHINOS LEAVE THEIR MARK THROUGH THEIR URINE & POOP

Rhinos have scent glad at the bottom of their feet. Their whereabouts can be traced by their urine and dunk which tends to get stuck on their feet and gets distributed wherever they go.

Rhinos love to swim and can dive and feed underwater. They enjoy cool and wet places like lakes and riverine surroundings.

Rhinos can run as fast as (up to 40 km/h) and are very alert, despite their massive shape and size.

Rhinos often are seen wallowing in the mud. Many of them gather in places filled with mud that serve as meeting points for them to gather socially and chill out together.