So wrote William Blake in honour of this magnificent beast. And yes, seeing a tiger in the flesh, even if it’s for the umpteenth time, does send shivers down your spine.

In the forests of the night;

What immortal hand or eye,

Could frame thy fearful symmetry?

So wrote William Blake in honour of this magnificent beast. And yes, seeing a tiger in the flesh, even if it’s for the umpteenth time, does send shivers down your spine. It’s only after they’ve wandered off that you realise you were transfixed. Your breath catches in your throat and it feels like your heart has stopped. It’s as though missing even a second could leave you disappointed.

Curious spellings aside, Blake’s observations reflect the spirit of his times, and the animal was hunted to near extinction before efforts to support their regeneration began in earnest. It wouldn’t have left a great impression on the world if India’s national animal could only be found in zoos. Especially since tigers have played a significant role in the development of Indian culture and natural heritage.

Conservation efforts, especially those over the last 50 years, have led to a relatively healthy population of over 1400 of these big cats thriving in national parks across the country. Unfortunately, poaching is still rampant, as is human encroachment and habitat destruction. It is only man’s folly that’s holding back the return of Sher Khan.

Spotting tigers in the wild 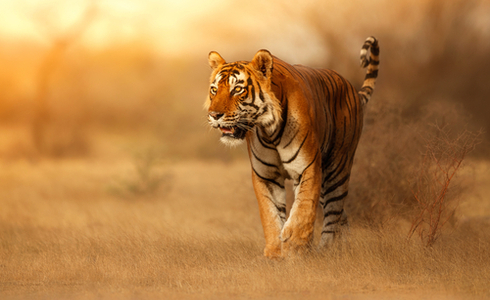 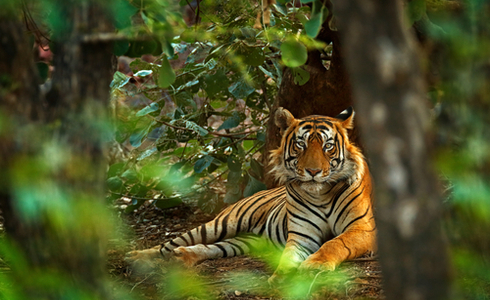 There are many who have returned from tiger safaris disappointed. And that’s the beauty of this beast. You’re in their territory, and you have to fit in with their way of life. When you finally see one, especially a mother with her cubs, it’s something you will end up telling your grandchildren about.

The good thing is that there are a number of parks where you are more likely to see these feline beauties in the wild. Here are some of the best places to visit if your main objective is to spot this majestic animal.

Established in 1936, this is arguably the most well-known National Park in the country and is 500 sq km in area. Given the strenuous efforts by conservationists and government agencies, Uttarakhand now has the second largest number of tigers in India.

The tiger reserve has been divided into five regions, with each region offering special tours and jungle safaris. Of these, Dhikala and Bijrani have elephant safaris.

The Dhikala Forest Lodge is particularly famous, and you’re more likely to spot a tiger here than anywhere else. Corbett also has a substantial population of leopards, jungle cats, sloth bears, jackals, and deer of many kinds. With numerous grasslands and water bodies, Bijrani (eastern side of Corbett) tend to attract tigers and their prey.

The park remains open from October to June, and the best time for tiger spotting is from March to June, though visibility may be marred by dust. If you are looking for a family stay near Corbett tiger reserve then opt for Club Mahindra Corbett resort in Uttarakhand for a memorable holiday.

At over 1100 sq km, Ranthambore is one of the country’s largest National Parks. Once it was favoured hunting grounds of the Maharajas of Jaipur, the park became famous in the 1960s when Queen Elizabeth II visited with Prince Philip, who managed to shoot a tiger. Tigers were given protected status from hunters and poachers in 1973, and Ranthambore is today one of the best tiger reserves in India.

Among the more interesting features of the park are some ancient ruins, including a fort where tigers and leopards are often spotted. Sloth bears, hyenas, Indian foxes, jackals, and crocodiles are also found aplenty in the park. The Kachida valley has a generous population of panthers too.

Ranthambore has three lakes – Raj Talao, Padam Talao, and Malik Talao – where wildlife flock in large numbers. Tigresses and their cubs can be found in the Bakaula area, a place with dense forest and small watering holes.

Even though the park is open from October to June, winters can be freezing and summers oppressively hot. The best weather is during February and March, but the greatest chances of spotting a tiger are in April and May.

It isn’t hard to imagine Kanha being the setting for Mowgli’s adventures in ‘The Jungle Book’. Spread across a wide zone, which includes large, open meadows, this park is a favoured destination for wildlife admirers. The chances of spotting tigers and other wildlife are extremely high. Kanha is also home to the hard-ground barasingha, an endangered species of deer found only here.

The sanctity of the park is well maintained, and if you’re lucky you may have an encounter with as many as four or five tigers roaming around in a group. While the park is open from October to June, the best time to spot tigers is during the summer months – April to June. If you are looking for a resort near Kanha National park, stay at Club Mahindra Kanha resort which offers plethora of fun filled holiday activities to keep you entertained throughout your family vacation. 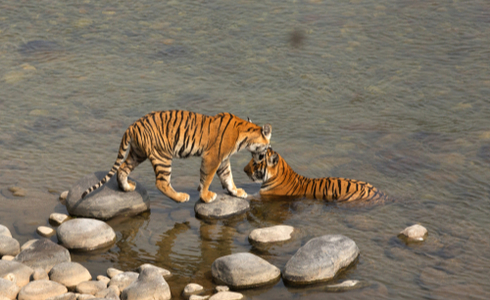 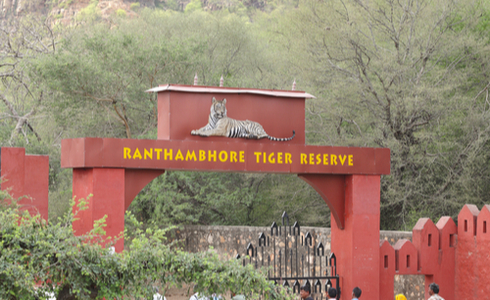 Located amidst the Satpura and Vindhya ranges, this park has the highest density of tigers in the region. The park is known as the ‘Land of the White Tiger’, even though it’s been nearly 70 years since Maharaja Martand Singh of Rewa captured the last one in the wild here.

The historically important Bandhavgarh Fort is located within the park, and while that is itself worth a visit, you’re here for the tigers. And the best time to see these big cats is from April to June, though the Park is open from October to June.

Covering an area of almost 2600 sq km, the Sunderbans is the largest tiger reserve and National Park on the Indian subcontinent. A UNESCO World Heritage Site, this reserve is located at the southern tip of West Bengal, where the wetland meets the sea, and is home to 400 Royal Bengal tigers. It also has the largest mangrove forest in India as a result of the numerous creeks and tributaries formed by the delta of the Ganga, Brahmaputra, and Meghna rivers.

The Sunderbans derives its name from the ‘Sundari’ tree. The central area of the reserve has its own natural riparian boundaries, with the Matla to the west, the Hariabhanga to its east, and the Netidhopani and Gosba to the north. These elements make this tiger reserve an absolute heaven, a large part of which remains unexplored.

A unique feature of this reserve is that boats are used for transportation and sightseeing. This is one of the few tiger reserves in India that’s open to tourists from September to March, with the period between December and February being the best time to visit.

At 1725 sq km, the ‘Jewel of Vidarbha’ – as the park is popularly called – is the biggest National Park in Maharashtra. It is located at the core of reserved teak and bamboo forest, but the landscape also includes marshlands, lakes, and jagged cliffs. In addition to tigers, you will find panthers, hyenas, sloth bears, wild dogs, jackals, and many varieties of deer.

With tigers being relatively easy to spot in the park, an open Maruti Gypsy and trained guides ensure you go back home with many memorable experiences. And the best time to visit for these experiences? February to May.

The best time to see tigers is between right now and the onset of the monsoon, so you’d better get cracking with your planning. Slots and accommodation fill up fast. But the one thing we can all take pride in is that India is home to the vast majority of tigers in their natural habitat.

It’s the call of the wild, so what are you waiting for? Become a Club Mahindra member today & embark on a magical journey with family. Also, read through these Club Mahindra reviews & get a sneak peek of what members have to say about Club Mahindra resorts, situated at popular holiday destinations of India!