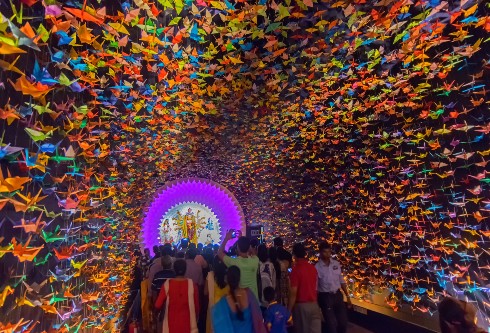 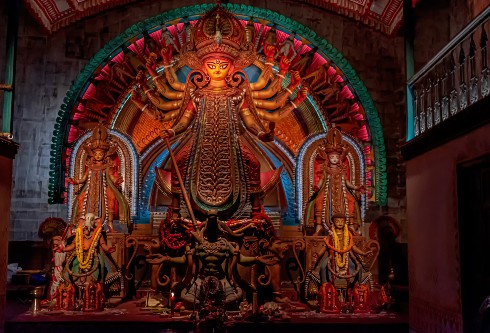 Looking for an enervating experience on your next vacation? Plan a trip to the City of Joy, Kolkata during Durga Puja 2021. The West Bengal capital brings alive the most spectacular celebration of the goddess in a festival spanning nine-nights. Kolkata Durga Puja is of special significance for the Bengalis as it brings in religious worship, and is symbolic of the coming of Goddess Durga to her maika (mother’s home) – as she descends into the human world - before she departs on the tenth day (dashmi) to return again the following year. Between September and October, each year, during the Hindu month of ashvin, Kolkata submerges in a vibrant complexion to celebrate what they call, Durga Pujo.

Kolkata transforms into magical city with the brilliance of lights, pujalayas (ritual sites) sheltered within large pandals, the sound of prayers and aarti filling the air with an auspicious ring, and the streets ablaze with food stalls. The ritual processions at the puja’s conclusion on the river Hooghly’s ceremonial ghats are an electric sight to behold, with gigantic idols of Durga, mirroring Shakti - the feminine divine energy, ruling the streets on the way to the river for the immersion.

Make Kolkata one of your October travel destinations to enjoy the celebrations to the fullest. Cue into the Durga Puja 2021 guide, just in time for the festival this year.

Be prepared for a joyful atmosphere full of chants, hymns, aarti time announcements, and the bustle of the people on the streets midst flags and banners. The celebrations start a day before Navratri commences. The Ma Durga myth is recited, played out and telecast on all media and naturally the air is redolent with cheers.

The goddess is an incarnation of Parvati, the wife of Lord Shiva, and is the representation of female shakti, ruling the pantheon of Indian goddesses. Her demon slaying feat, of piercing to death the shape-shifting buffalo-demon Mahisa, who tricks the gods into granting him immortality, is in full glow everywhere. The supremely beautiful Durga or Dugga, as she is fondly called in West Bengal, with her multitude of weapons, beheads Mahisa, with her two valiant sons Kartikeya and Ganesha standing by her side.

There are RJs chattering on the radio, loud playouts of the serial on the television, filmstars greeting the public on the occasion, and happy beats filling the air with filmi songs and more on loudspeakers.

Pro Tip - Remember to stay hydrated as the teeming crowds, lights, and walking lengths often saps you. Pickpockets abound in crowds, so guard yourself.

The traditional aristocratic households in Northern part of Kolkata bring in their own Durga Pujo celebrations. A treat to be experienced as their lavish, ancestral bungalows are thrown open to all for Durga darshan and you can even interact with the fourth-generation family members, dressed in their finery and heirloom jewellery.

The Southern part of Kolkata is the more modern, heavily urbanised area. Pandals are set up here too, but with a modern twist. Most are sponsored by leading corporates, have mammoth, creatively shaped idols, and about 70 per cent of them have a fringe area with hundreds of stalls. From papads to pickles, wooden toys, kantha work, and handicrafts to clothes and home accessories, everything is available under the bright lights as people mill into the city from all the neighbouring districts to sell their wares.

Pro Tip - Slip on comfortable footwear and be prepared to walk stretches as the city welcomes Durga Ma with open arms. Book tickets online at the government website for entry to pandals of your choice. Maps of all the pandals are available online and daily in the newspapers to help you make your choice. The ‘Sharadotsav’ app by West Bengal Tourism is very helpful as it offers a zone-wise puja section. Else hop onto a haath gadi (hand pulled rickshaw) if tired. 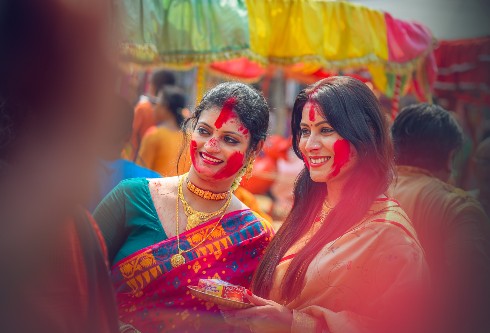 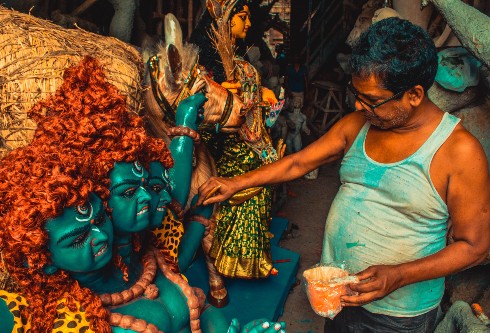 Everyone, whether rich or poor, wears new clothes during the nine days. You needn’t slip on a saree essentially, but since it is a traditional festival, dress up bright and Indian. In keeping with the richness and splendor, go the entire mile and put on vibrant colors. The bhog or the khana that is typical of all the traditional pandals in Mumbai – whether Rani Mukherjee’s or Kajol’s family pandals – is mostly missing in Kolkata. Prasad is given to all coming in to pay their respects to the goddess, but only a few pandals in Southern part of Kolkata lay out the bhog in a fusion style celebration.

Bengalis do not cook at home during Durga Puja! From jhaal muri to fish fry to biryani, puchkas to Kathi rolls and samosas, everything is available, hot and sizzling, for sale on the stalls. Enjoy traditional Bengali cuisine at restaurants. The entire city is alive 24 hours each day during the festival.

The brilliance of Durga Pujo comes alive in the evening in a stunning display of lights. Though mornings are less crowded, you can live the magic only when the sun sets. There are competitions and cash awards for the best pandal, the best Durga idol, the best light arrangements, the best eco-friendly set up and the hand artistry must be seen to be believed.

Shringar is elevated to a superlative level, from the fish scales, and even coconut kernels used to shape the Durga idols to the striking etching of her facial features, to the passionate acoustics of the white-feathered dhak – the drum that is pounded during the Pujo - that fill the air.

There are various clubs in every area that make the arrangements. The air is fragrant with the white shiuli flowers – called kaash locally - that are present everywhere, like the omnipresence of Durga Ma. There are two lavish aartis: the morning aarti, and the mega Sandhya aarti at midnight - that is a sheer sight to behold. Take part in sindoor khela, it is a ritual observed by all married women as they smear vermilion on each other on the tenth day.

Purchase shola Durga Ma to place as an auspicious symbol at your home’s doorway and make space of a Bengali saree in your closet. The traditional hand artistry brings alive finely detailed work. Hatibagan in the north, College Street and New Market in central Kolkata, and Gariahat in the south are good areas to shop in.

For that special Durga idol, go to Kumartuli in the north to make your purchase. The final aarti is followed by the immersion of the Durga Ma idols in the Hooghly river. The ghats are very well organised, in terms of station points where you can gather and get a vantage view. The idols are taken to the middle of the river and immersed. You can hire a boat to take you to the middle of the river and back and experience the charm of the entire ritual, it is a hair-raising experience that induces the fervor through the revelry. In a few weeks, Lakshmi pooja and then Saraswati pooja are also performed in a part of the same pandal before the timer is set to welcome Durga Ma the following year.

Durga Puja in Kolkata is an overwhelming rhythm to be savoured at least once in a lifetime. Hopefully, this guide was able to paint the best pictures of the scene in Kolkata for you. With Club Mahindra, you can easily plan your holiday, visit the website and choose from the best partner hotels we have in Kolkata for you.