No matter what you do or where you go, India’s diversity and multidimensional facets will jostle your entire being. Home to a billion people, India features an eclectic religious and cultural cocktail worth comprehending. And for those yearning for spiritual sustenance, the country offers oodles of possibilities to gratify their longings. Apart from the countless Indian festivals being observed across the country, July month stands witness to the legendary Jagannath Rath Yatra or Puri Rath Yatra, to be held in Puri, Odisha.

Well, like last year, there is a restriction on large gatherings and visitors from other states in the interest of public health due to the prevailing COVID-19 pandemic. The state government has appealed to the people not to visit Puri during the festival and instead, watch the live broadcast of the Rath Yatra on TV. Since, you cannot visit the Puri Rath Yatra, we thought, we will give you an insight into this mammoth Hindu festival, so that you can be ready in advance for the next year’s yatra.

For the second consecutive year, given the current COVID-19 situation, Odisha government has restricted people's participation and large gathering in the Ratha Yatra.  The administration has also announced a 48-hour curfew. The restrictive measure will be imposed at 8 pm on July 11, a day before the Ratha Yatra, and continue till 8 pm on July 13.

Juggernaut Is Ready to Roll

Did you know that the word ‘’ Juggernaut’’ found its place in the English Dictionary after being derived from the gargantuan chariot of Lord Jagannath. The remarkably episodic Rath Yatra is one that we read in history books and has been in the records of the Vedas dating back to thousands of years. The preparation of this annual festival starts way before the actual celebration. Every year hundreds of artisans gather at Puri to craft gigantic chariots with full zeal and enthusiasm. 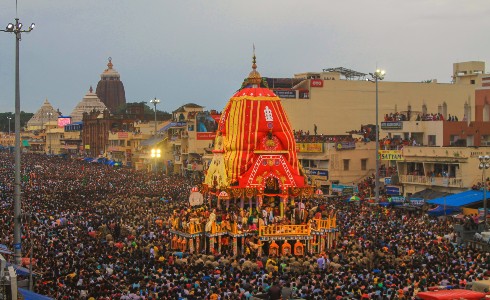 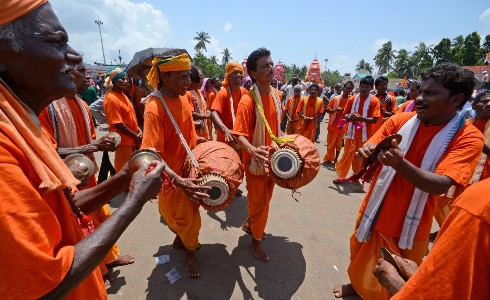 Learn What the Mythology Say

There are numerous folklores associated with the Jagannath Rath Yatra. According to the legends, it is said that the Rath Yatra is symbolic of the journey of Lord Jagannath or Krishna (an incarnation of Lord Vishnu) with his siblings Balabhadra or Balaram and Subhadra to Mathura to slay Kansa his devious uncle. Other mythical stories say that this celebration is based on the yearning of Lord Krishna to visit his birthplace Gundicha Gharis once a year for seven days. So every year, he along with his siblings steps out of the Jagannath Temple to make his way to Gundicha Temple.

The festival in Odisha marks the commencement of a grand procession which tips off from the 12th century Jagannath temple in Puri. This ceremony takes place on the second day of the Ashadh month (22 June to 22 July) in the Hindu calendar. This 9 to 10 days festival begins with the ritual ‘pahandi’ when the servitors carry the deities out from the main temple’s praagan (premises) to the chariots.

Three chariots make up the Rath Yatra, 45ft (13.71mts) high and having sixteen wheels, Nandighosh serves as a seat for Lord Jagannath. 44ft (13.2mts) high consisting of fourteen wheels is Taladvaja, the chariot of Balaram and 43ft (12.9mts) in height having twelve wheels is Padmadhvaja chariot of Subhadra.

If you happen to be among the spectators, this time of the year at Puri it is bound to leave you amazed. Watch an ocean of people whole-heartedly submit themselves to the lord, as they push and pull the gigantic chariots consistently chanting mantras. Amidst rhythmic beats of carillon and huge drums, the wooden chariots are driven on the Grand Road or Bada Danda which completely submerges in the spiritual fervor. Merely a touch of the ropes frees one from all the sins and cleanse the soul. 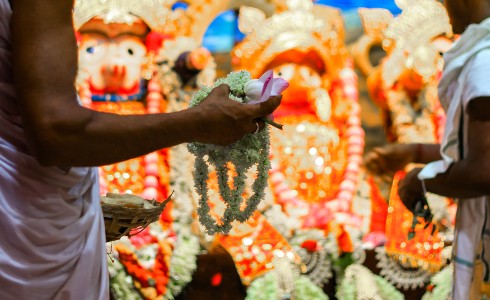 Apart from the countless rituals that are duly performed, ‘chhenra panhara’, is one of the popular rituals. A member from the Royal Family of Puri performs this ritual which calls for the king to sweep the chariot with a broom while the servitors sprinkle flower petals and water. The chariots are swept with a golden broom humbly by the king signifying that everyone is equal in the eyes of the Lord.

On reaching Gundicha Temple, the deities spend over 9 days at the temple after which on the 10th day they are set out for Bahuda Yatra, the journey of home-coming. Thousands of devotees swell in and out over 10 days pulling the three chariots until they reach back to the Jagannath temple.

On their return, the trio stays inside the chariots for another two days. Suna Besha, decorating the deities with gold jewelry and Adhar Pana, preparing sugary drinks for the gods, both of these rituals are religiously carried out.

It is the 12th day when Lord Jagannath, Balabhadra, and Subhadra are taken back inside the temple premises. Niladri Bije, when deities are offered rasagulla bhog, is the ritual that concludes the Puri Rath Yatra one of the greatest spectacles to watch on planet earth.

How to Reach Puri

By Air. Biju Patnaik airport at Bhubaneswar is the nearest airport, which is nearly 56 km from the heart of Puri city. The airport is connected to Delhi, Mumbai, Kolkata, and many other cities of India.

By Train. Puri is a major railway junction.

By Road. Puri is connected with the neighbouring cities. There are state and private buses that offer good inter-city and inter-state connectivity.

Attractions in and around  Puri

Hope, we’ve covered all the important points of Puri Rath Yatra for you. In case you have more questions, please leave them in the comment section below.