Timeless and ethereal, Nainital in Uttarakhand has long since been topping a traveler’s list of best places to visit in India. Meandering roads, emerald lakes, and indelible imprints of British colonialism make it stand out from the rest.

A magnet for ardent roamers, avid trekkers, and passionate shutterbugs, Nainital stays teeming with visitors almost year-round. The month of September is an ideal time to visit this place as it features salubrious weather with less rainfall and enchanting scenic beauty around.

Myth and mountain go hand in hand, one reason why Nainital turns into a turf attracting countless tourists from places far and wide in the September month. Nandashtami, a local religious event, brings it under the spotlight. Let us learn about the enigma of this festival.

Nature (Prakriti), as per the Indian civilization, has been a manifestation of divine force. Rivers, mountains, and oceans are her wonders, which are way beyond the writings of a poet and a lens of a photographer. Unlike the British, who believed in building dak bungalows on mountaintops, Indian’s consider nature the footprints of the divine hence sublime and worth worshipping.

Lot more than the view, climb, and exploration, mountains are moral instruments that give direction to life. They may elevate our heart or sway us into a silent dialogue with self; mountains possess virtue in their character and have the ability to leave stirring impacts. For thousands of years they have become godlike and have been the epicenters of dharmic (religious) practices.

The festivals in the mountains are utterly marvelous experiences opening up windows to a parallel universe. During festivals and spiritual occasions, local villagers host devta natch through which gods and goddesses are called upon to enter the human body amidst electrifying drumming done by hurakia (drummer). Other oral traditions include community jagars, a ritual during which local deities and gods are woken from their latent stage and asked for favors or remedies. Shamanic rituals and jangam have also been a part of such vernacular traditions belonging specifically to the mountains. 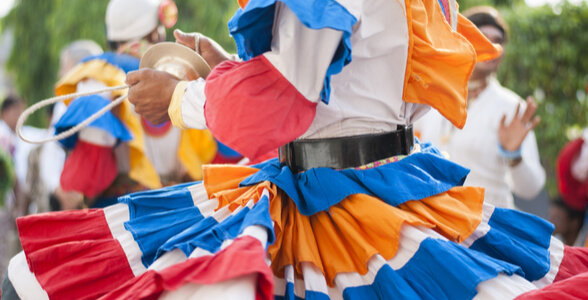 Nanda Devi Festival or Nandashtami is one major celebration observed in the Kumaon Region of Uttarakhand in Nainital, Bageshwar, Almora, Bhowali, Kot, and far-flung villages of Johar, to name a few.

Nandashtami is a festival celebrated since the 19th century in several ways at different locales in the mountains. As per local traditions, Nanda Devi is married to Lord Shiva, the yogi of Kailasa, and is a goddess that grants prosperity and also is the one who has the power to curse.

Way back in the centuries, every year Nandashtami, marked a procession that kicked off from the Nauti village in Karnaprayag, Uttarakhand. Village inhabitants took the goddess in her palanquin (doli) to Baiduni Kund, located at the foot of the Trishul Peak.

A more elaborate version of this festival took place every 12th year when Nanda Devi’s palanquin, accompanied by her attendant Latu, was carried by devotees coming together from different villages and locales. The goddess was taken through the snow beyond Baiduni Kund to reach the two huge glittering stones (sila) situated on the top of the mountain. No one was allowed to cut wood, gather grass, cook food and sing aloud on that particular mountain as doing so would bring some calamity on the devotees who were part of the procession.

Raj Yatra or the annual yatra has also been a part of the Nanda Devi Festival. Nanda being the out married daughter or the Dhyani, every year on Nandashtami, is welcomed to her natal home and is believed to bring riches to her family. She is pampered and preened for 5 to 7 days, and the main event takes place on her departure to Kailasa, her husband’s home. The final day marks elaborate rituals amidst women lamenting her departure by singing farewell songs. On the other hand, men escort the image of the Devi in a palanquin (doli) to the top of the mountain (where Lord Shiva resides).

Residents from the upper reaches of the Central Himalayas especially bred a four-horned ram for this occasion. Numerous palanquins (doli) from diverse locations join in the journey to bid farewell to the Dhyani. Eventually, a ram loaded with gifts goes in the direction of Kailasa, and the escorts return home.

There are legends that state that during Nandashtami, a four-horned goat takes birth invariably in Chandpur. This goat then accompanies the devotees during the yatra and is let loose in the mountains. This scared goat then suddenly disappears and soon returns headless endowing the escorts with consecrated food. 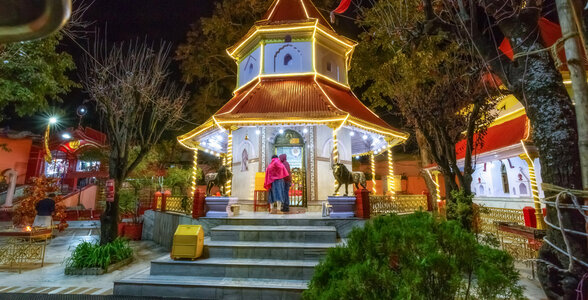 Nanda Devi Mela is an encapsulating affair hosted around the Nanda Devi Temple. A bustling market comes to life that characterizes village crafts and local handmade products. Countless pilgrims from the Garhwal and Kumaon regions of Uttarakhand gather to partake in the mela and the procession. In the middle of mind-boggling folk song and dance performances, Goddess Nanda Devi is welcomed home with utmost zeal.

Extraordinary is this festival which stands testimony to the unwavering religious beliefs and nature’s sublimity. If you haven’t been a part of Nandashtami, it is time to witness this celebration in Nainital, which is out worldly.