With its laidback vibe, easy-going local residents, delicious cuisine, and so many places to explore, Goa is one of the foremost party destinations in the world.

With its laidback vibe, easy-going local residents, delicious cuisine, and so many places to explore, Goa is one of the foremost party destinations in the world. Rising numbers of tourists making a beeline for Goa’s tourist places have not dimmed its sheen. On the contrary, it continues to be the cosy, happy haven of fun and frolic for every visitor irrespective of the age-group.

There’s so much to experience in Goa that you would do better to start with a checklist of the places you wish to visit. Of course, this depends on the kind of holiday you are planning and the type of traveller you are. If you’re headed out with friends for a bachelorette or downtime, then simply lazing by the seaside and sampling delectable food and drinks should do the trick. But if you wish to see what delights Goa offers, then you should make a list so that you don’t miss out any of the important ones.

Club Mahindra has a stunning Goa resort that you should visit on your next holiday here. Get the best of comfort and state-of-the-art amenities in your resort, and kickstart your Goan holiday on the right note!

But first, here’s our list of suggestions for Goa tourist places you cannot miss:

One of the best ways to see Goa is along its coastline – and what a pretty coastline it is! Nestled close to the Aguada Fort which is located near Sinquerim Beach, the Aguada river throws up several surprises in the form of rapids, depth and forceful currents. But all of these create the perfect setting for water sports, and you can indulge your love for water adventure at Aguada river. You can book a tour of the fort and the surrounding locales, or just book yourself into parasailing, kayaking, boat rides or even scuba diving at one of the best Goa tourist places. 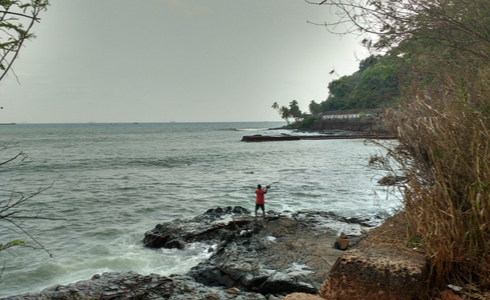 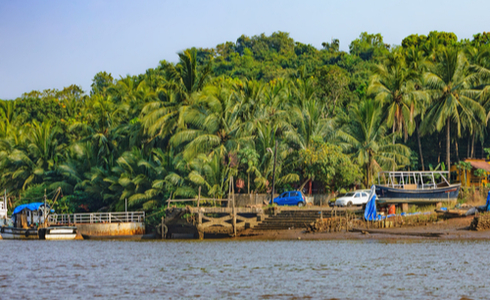 Located a short distance off Panaji, these two islands are a delight for those who enjoy being in proximity to nature. They must certainly feature in the Goa travel guide or list that you’re compiling for your trip. The Chorao Island – take a ferry from Ribander Village to get there – is home to a dense jungle of mangroves, exotic birds and crocodiles. It also houses the Salim Ali Bird Sanctuary on the Western side. There is a charming fishing village and a centuries-old temple here as well. Meanwhile, the Divar Island offers panoramic views of old Goa, the Mandovi River, and the Portuguese villas dotting the coast.

It’s normally a case of ‘If you’ve seen one, you’ve seen them all’ in terms of Goa’s beaches. But this is why you should make a beeline for Butterfly Beach, which is located towards the north of Palolem Beach. It is an island that, as the name suggests, is home to a large variety of butterflies. It also houses several varieties of crabs and goldfish. You can also spy sea urchins and sea cucumbers when the tide ebbs. Since the beach is quiet and secluded, the chances of spotting dolphins at this site are higher than at other Goa tourist places.

for Parties and Seafood One of Goa’s prettiest beaches, Colva Beach is also one of its busiest. It attracts a fair share of party animals from around the world, who are attracted to its pristine white sands, beachside shacks serving up a dizzying array of tasty seafood eats, and the many bars and pubs blasting dance music that invariably results in visitors getting up to dance with their friends and partners. If you’re not up for partying with large groups, you can take a stroll on the sand, or visit the adjoining Our Lady of Mercy Church. If you’re in Goa for water sports, you can check these out here: jet skiing, paragliding, speed boating or snorkelling.

5 The Basilica of Bom Jesus

The famous Basilica of Bom Jesus is an architectural and historical wonder for the ages. It figures on the UNESCO World Heritage Sites list under the ‘Churches and Convents’ category. But there are many reasons why this prime Goa tourist place must figure on your list: it was built in the late 1500s, it houses the remains of Saint Frances Xavier, valuable paintings, a mausoleum designed by the Florentine sculptor Giovanni Batista Foggini, and an entire gallery of artist Dom Martin’s surrealist imagery.

If you’re headed towards the scenic Mandovi River, you should make a pit stop for the Dudhsagar Falls. The waterfall is located plumb on the river, and the water gushes down from a nearly vertical mountain face at tremendous speed. You will also appreciate just how spectacular the setting for this waterfall is amidst the greenery. You could also take a dip in the deep green pool of water at the base of the Falls. 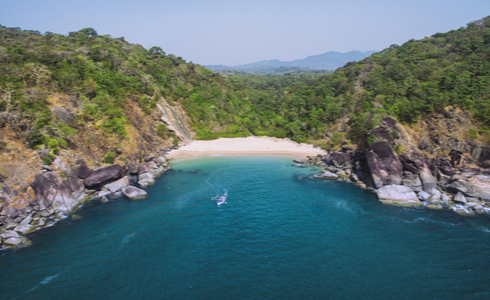 The historical Fort Aguada is dated to the 17th Century when it was built by the Portuguese to stave off attacks by Maratha and Dutch invaders. It is located in well-preserved glory on Candolim Beach, and there is much to explore here. Check out the site for the freshwater preserves on the Fort – many ships would stop by here to replenish their drinking water stores – and the lighthouse, gunpowder room, moat, ship storage and service area, and a now-defunct secret passage that was used for secret evacuations back then.

Another must-visit Goa tourist place is Dona Paula, the site of an ill-fated love story that is now a few centuries old. The legend goes that a beautiful princess named Dona Paula jumped off the cliff here after her parents refused to let her marry her lover, a fisherman’s son. Today, it is a bustling beach that offers splendid views, azure water, tasty seafood, and a small market that sells feni, shell necklaces, thong footwear, straw hats, and little knick-knacks to take back home. You can also bathe in the sea, or relax with a sumptuous lunch and cool refreshments at the beachside eateries or other restaurants in Goa.

Shoppers, ahoy! If you like shopping for interesting curios, clothes, footwear, headgear and even carpets and walking sticks, head to the Anjuna Flea Market. One of the most popular Goa tourist places, it is held at St Michael’s Vaddo every Wednesday from 9 am to 6 pm. However, it operates only during the tourist season of November to March every year, so time your visit accordingly.

This old fort rose to prominence after parts of the 1990s’ film hit Dil Chahta Hai were filmed here. However, it is replete with history and culture. Located high above the Chapora River in Bardez, it was built by Adil Shah but was later wrested from the Mughals by the Portuguese. It features steep slopes along all sides, but also the most stunning views of Goa all around. The Fort also houses old barracks and a church, which are in ruins today.

The Se Cathedral de Santa Catarina, popularly known as Se Cathedral, is a majestic edifice that symbolises the victory of Portuguese forces over the Muslim leaders in the 1500s. It was consecrated in the mid-1600s. It is one of the few buildings in the country to feature Corinthian and Tuscan elements, while the architecture is a Portuguese-Manueline mix. At 250 feet in height, the Cathedral is also one of the tallest buildings in Goa.

Goa is home to rich biodiversity comprising several species of animals, birds, flowers and herbs. Its green cover ensures that the State witnesses many migratory birds, while the dense jungles house several big cats and other large animals, too. However, you cannot miss the Butterfly Conservatory in Ponda. It is a butterfly sanctuary and not a zoo, where you can spot many species of butterflies that come to nest or mate.

Goa has its own Latin Quarter – it is India’s only Latin Quarter! That alone should make visiting it an important thing to do in Goa. It was originally used as a residential area for Portuguese Government officials and soldiers. Even today, it houses several heritage colonies and villas. It is located between the Ourem Creek and the Altinho Hills, and you can also find freshwater springs on one side while there is the seashore on the other. We recommend this spot highly if you are in Panjim.

Known as the ‘Tambdi Surla’ temple by locals, the Sri Mahadeva Temple is an important temple dating back to the 12th Century. It miraculously survived despite terrible attacks by Muslim and Portuguese invaders. It remained protected because it was located inside a dense jungle, adjoining the Western Ghats. Today, it is an important Hindu religious spot and a must-visit Goa tourist place.

If you’re in Ponda, you must certainly check out the Savoi Plantation. It is a 200-year-old organic plantation covering a mammoth 100 acres of area. You can book a tour and also eat at the on-site restaurant – the recipes exclusively use herbs and condiments (pepper, basil, thyme, etc.) cultivated on the plantation. It is a tranquil spot that offers a glimpse into organic farming and clean eating. The best time to visit Goa is between November and March, when the weather turns pleasant in tandem with the winter season. However, if you want to indulge in some hot sunshine and get some sightseeing done without heavy crowds, then the months between March and May are the ones to target.

Mahindra Holidays & Resorts India Limited (MHRIL), India’s leading player in the leisure hospitality industry, offers quality family holidays as also stated by Club Mahindra Reviews, primarily through vacation ownership memberships. While Club Mahindra is the flagship brand offering Club Mahindra Memberships, the other brands offered by the company are – Club Mahindra Fundays and Svaastha Spa. As on Mar 31, 2019, MHRIL has 61+ resorts across India and abroad and its subsidiary, Holiday Club Resorts Oy, Finland, a leading vacation ownership company in Europe has 33 resorts across Finland, Sweden and Spain. Visit us at www.clubmahindra.com