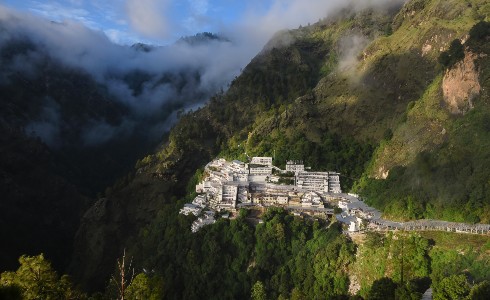 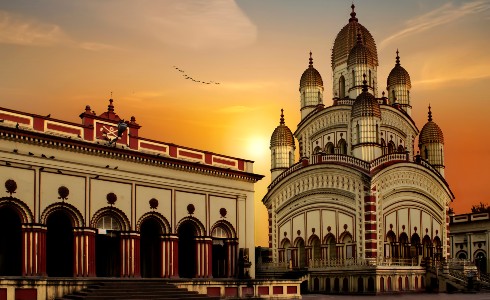 Maa Durga is one of the most revered goddesses of the Hindu pantheon. She is known for her strength, motherhood, devastation, and battle. Goddess Durga is also known as Shakti, which means "power." There are several Durga temples all throughout the country. The Hindu festival of Durga Puja/Navratri is celebrated annually to offer prayers and respect to Goddess Durga in all of her incarnations. During the festival, devotees also like to pay a visit to the idol of Goddess Durga at many temples spread across the country. So, here's a list of the most iconic Durga temples in India that you can plan to visit during this Durga Puja.

The Vaishno Devi Temple is India's one of the most renowned Hindu pilgrimages, located at the summit of Trikuta Hill at the height of 5200 feet in the Katra area of Jammu and Kashmir. According to tradition, Maa Vaishno Devi was incarnated on earth as Shakti (power) of Goddess Parvati, Laxmi, and Saraswati for the development of humanity. This sacred site is known as the most significant Shakti Peetha since it is said that the Goddess's skull fell here. Every year, a large number of worshippers make the 13-kilometre trip to the temple, which is considered one of the most important Durga shrines. The 13-kilometre trip up to the temple begins at Katra, a tiny hamlet in Jammu, from whence the journey may be completed on foot or on horseback. Unlike other temples, where the Goddess is represented by statues or pictures, Vaishno Devi's shrine features natural rock formations inside a cave known as the pindies.

Dakshineswar Kali Temple is one of the most renowned temples devoted to Goddess Kali. It is nestled on the eastern brink of the Hooghly River. Rani Rashmoni, a philanthropist and Kali follower, constructed it in 1855. The three-storeyed south-facing temple has nine spires spread in the upper two floors and sits on a platform with a flight of stairs, built in the nine spires style of Bengal architecture. The garbha griha (sanctum sanctorum) has an idol of Goddess Kali, known as Bhavatarini, standing on the chest of a reclining Shiva, and the two idols are set on a silver thousand-petaled lotus throne. 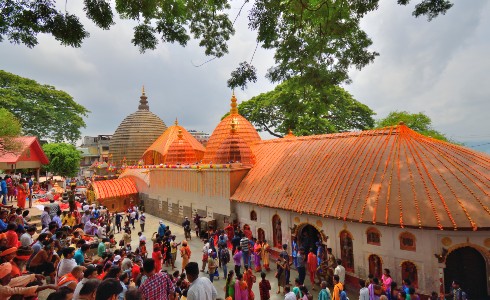 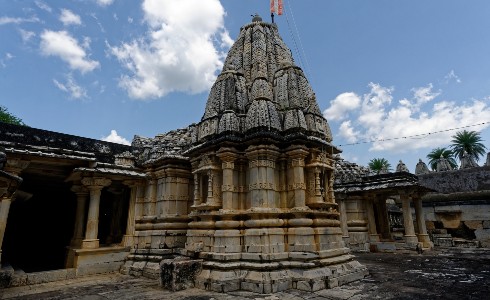 Kamakhya Temple is perched on top of Nilachal Hills, within a cave, along the banks of the Brahmaputra River. It is one of Goddess Durga's 108 Shakti Peetha shrines. Each of this shakti peetha is constructed from a portion of Sati's body that was cut into many parts by Lord Vishnu's Sudarshan Chakra while Lord Shiva was carrying Sati's body on his shoulder after her death. Sati's reproductive organ is said to have fallen on the site where the Kamakhya Temple was constructed. The Kamakhya Temple is flanked by ten smaller temples, each of which is devoted to one of Goddess Kali's incarnations. The Navratri celebration, Ambubachi festival, and Druga Puja are celebrated with zeal, and a large throng may be seen during these times.

Ambaji Temple is one of Goddess Durga's 51 Shakti Peethas. On the slopes of Arasur Parvat in the Ambica forest, Ambaji Temple is situated near the source of the famed holy River Saraswati. The shrine is frequently visited by newlyweds seeking the Goddess's favour for lifelong marital happiness. It is said that paying a visit to this temple ensures happy married life. Ambaji Temple's primary attractions are Diwali, Poornima, and Navrati festivals. 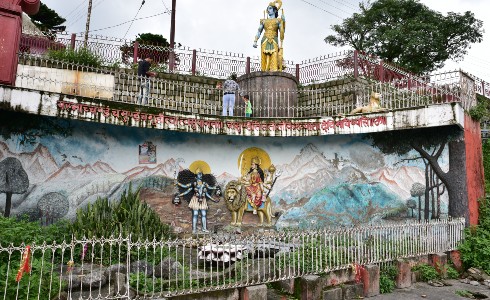 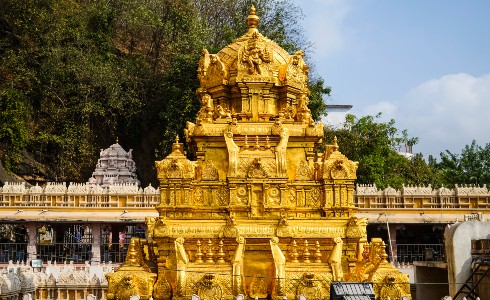 The Chamunda Devi Temple is another prominent Durga temple in India, located in the Himachal Pradesh highlands in Padar (close to Palampur) on the banks of the River Baner. This temple is devoted to Maa Chamunda, one of Goddess Durga's many incarnations. This temple is also known for its natural splendour, which is located against the backdrop of the Dhauladhar Mountains and Himachal Pradesh's breathtaking magnificence. The idols of Hanuman Ji and Bhairon Nath who are regarded as her guardian flank Chamunda Devi's idol. Chamunda Devi Temple is a great place to go if you want to witness natural beauty while being surrounded by Goddess Durga during Navratri.

The Kanaka Durga Temple, perched on the Indrakeeladri hilltop, has enormous mythical importance and attracts worshippers for its majestic architecture, scenic views, and the holy spirit. According to legend, this is where Arjuna of the Mahabharata epic acquired the Pasupatha Astra after doing penance for Lord Shiva. Arjuna is said to have built the temple and dedicated it to Kanaka Durga, one of Goddess Durga's many incarnations. Thousands of devotees flock to Kanaka Durga Temple to participate in a special prayer session during the Dussehra, which is celebrated with tremendous zeal.

All the awe-inspiring Durga Temples are guaranteed to make you experience a sense of devotion to the universe's greatest power. So, this Durga Puja, pay a visit to one of these Durga Temples to experience the splendour and renew your faith.