Most people visit the State of Rajasthan for a longish holiday. After all, it is a vast State with several important cities and towns like Jaipur and Udaipur.

Most people visit the State of Rajasthan for a longish holiday. After all, it is a vast State with several important cities and towns like Jaipur and Udaipur. But you have the chance to make a quick dash to Udaipur. Problem is, you’ve never visited it before, and you don’t know how to see any or all of it in a quick visit!

Realistically, you cannot visit any place in the world and claim to have known it completely in just a couple of days. Every city has its own rhythm, culture and history, and it sometimes takes a lifetime to get to grips with the pulse of a place.

But you have just a few days on hand, so you will need to see as many Udaipur tourist places as you can manage. Here’s how you can do this:

Check the expected weather during your Udaipur holiday. You are aware of the season (summer/monsoon/winter) but if you want day-to-day weather, you can check climate monitoring sites like Accuweather.

Devote enough time to sightseeing and relaxing. You don’t want to be get completely exhausted from seeing all the tourist spots and not have time to kick back and relax.

Be realistic about your expectations. If your hotel or resort is too far away from most spots, you may either book an Udaipur resort that is close to the popular tourist spots, or pare down your list of things to do in Udaipur.

Book your travel tickets and resort as quickly as you can. The closer you book to your departure date, the dearer the tickets and room tariffs become.

Draw an itinerary of the Udaipur tourist places that you absolutely don’t want to miss out on. Look up distances to these places from your resort, and modify the list (add or subtract some places) accordingly.

Now that you have bookings sorted out, but still need a nudge to plan your itinerary, here’s our list of the best Udaipur tourist places to visit:

The man-made lake is one of the wonders of Udaipur. Boating on this lake is highly recommended. Many locals visit this area and sit on the banks of the lake awaiting sunrise, sipping on kulhads of chai or simply chatting with each other. The lake has a hill range on one side, and bathing ghats and several old palaces on the other. Peaceful and pretty, Lake Pichola will warm the cockles of your heart and calm your frazzled nerves.

Just like palaces and forts, Udaipur abounds in ghats and kunds. The Ambrai Ghat offers a beautiful view of Udaipur and is considered to be one of the most romantic spots in the city. It is located just outside the City Palace and is also close to the famous Hanuman Ghat. If you are in Udaipur with your partner, then you should certainly catch the mesmerising sunset at this ghat. If it’s some quality time you seek with your partner, then this is an important Udaipur tourist place. 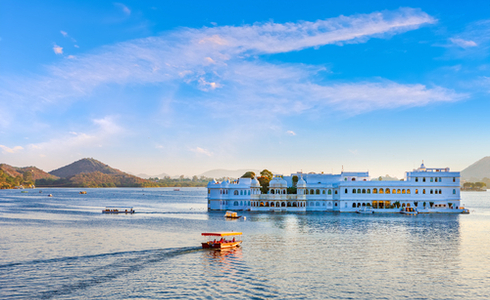 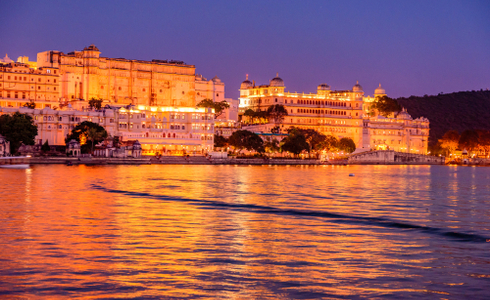 This is a majestic temple featuring splendid carvings and murals. It is located in the Lal Ghat area near the City Palace. Built in 1961 by one of the last kings in the region, Maharana Jagat Singh, it is famous for the black Lord Jagannath stone idol on its premises. The public throngs the temple every day, and particularly during the sunrise and sunset aartis. It is an essential Udaipur tourist place if you are spiritual or religious in nature.

This curiously-named temple is dedicated to Lord Shiva and draws lakhs of devotees every year during Shivratri. Boasting of a magnificent two-storey structure, it features a pyramidal roof and a carved tower – nobody quite knows how these un-Hindu elements made their way into the temple architecture. There is a series of steps leading to a lake located behind the temple.

Every Udaipur travel guide lists the Jag Mohan Palace as a must-visit spot in the city – and with good reason. The Palace is a three-storey structure crafted out of yellow sandstone and marble, and it gleams like a flame in the night when the lights in the area are switched on. It features a majestic entrance depicting eight large elephants carved out of marble. It was built in the 1550s by the then Rajput rulers, but was later usurped by the Mughals. It is said that the emperor Shah Jahan used it as a hideout from his enemies.

This is one of the grandest palaces in Udaipur, built to house a whopping 100 living quarters scaled lavishly. It dates back to the 18th Century and is located on Lake Pichola. The palace was used by the royal family, their ministers and companions, and also the domestic staff. It features airy courtyards, many terraces and pretty gardens. Also check out the intricate mirror work and frescos on the walls. Today, the palace is a remastered arts and crafts museum whose most famous element is the puppet gallery.

On the subject of palaces, you might also want to visit this Udaipur tourist place named after its creator, Maharana Sajjan Singh. The king was a keen astronomer and commissioned this building to be built as the largest observatory of the country. The building indeed lives up to this vision: it is nine stories high and built entirely of stone. It is said that the building also had modern star gazing equipment. However, for reasons unknown, it was later refurbished and converted into a palace for the king and his household.

This imposing memorial is dedicated to – and is conceptualised on – the brave Rajput warrior Maharana Pratap and his faithful steed Chetak. This significant Udaipur tourist place shows Maharana Pratap astride Chetak and ready to charge into battle. The statue is minutely detailed and is carved out of bronze. It was installed in the year 1948.

History remembers this site as the place where the bloody Haldighati battle was fought between Maharana Pratap and Raja Mansingh, the king of Amber province. The battle resulted in the death of the former and scores of officers and soldiers on both sides, along with several animals. The huge amount of bloodshed on the battlefield is said to have permanently stained the soil red. You will love the serenity and mystery of this important Udaipur tourist place.

It would appear that there is a garden or a public park in every corner of Udaipur – and you would be right. Part of this tradition of having the city decorated with public squares and gardens, the Doodh Talai Musical Garden is a garden comprising an interesting formation of rocks and fountains, interspersed with flowering plants. Sound and light shows take place here in the tourist season. Go look at it to tick off an important site of Udaipur tourism.

Since you’re visiting the Garden City of Udaipur, do make a pit stop at the famous Saheliyon Ki Bari. Located on the banks of the Fateh Sagar Lake, the garden was created for the companions of the Maharana Sangram Singh’s queen after she got married to him. The maidens would use the garden away from prying male eyes – nobody was supposed to visit the vicinity when the Queen and her companions were using it.

* Mansapurna Karni Mata ropeway: Away from the history and sedateness of Udaipur, head to the dazzling Karni Mata Temple at Doodh Talai for a thrilling cable car ride. Take a 5-minute cable car ride up the hill, starting at Deendayal Park and ending at the temple. The cable car offers panoramic views of the city, and you will be entranced by the sunset at the top. But get in line early or pay more to skip the queue – there is always a crowd waiting to try the cable cars, so the wait is long.

* Shilpgram: Far from statues and monuments and gardens, is the little artists’ village of Shilpgram. The place is like a moving museum, showing the lifestyle and artistic culture of not just Rajasthani artisans, but those from all of Western India. It was inaugurated by the late Prime Minister Rajiv Gandhi, and it was built to create awareness about the lifestyles of tribal artisans and their work, most forms of which are now becoming obsolete. Shilpgram is located about 3 km from the city centre and is an important tourist attraction. 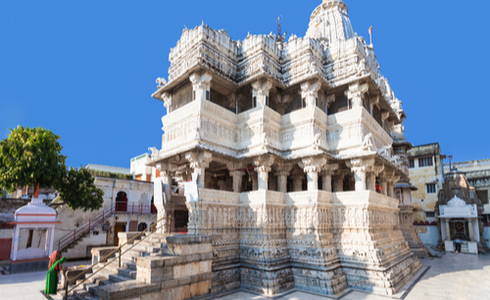 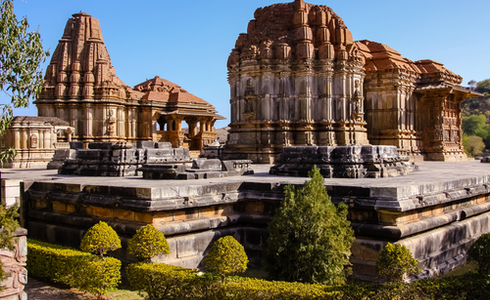 All lovers of old cars should make a stop for this unusual museum. It houses a sizeable collection of old and expensive cars, from Rolls Royces to Mercedes models. Most of the cars in the museum have been sourced from the stables of the erstwhile Mewar families of Udaipur, which were amongst the richest royal families in India. Many of the cars on display were custom-made for their owners, and you can study the plaques alongside to get more information on each car.

* Hathi Pol Bazar: Our list of the best Udaipur tourist places would be incomplete if we did not include the famous Hathi Pol Bazaar. This market is a magnet for those looking for a variety of things to take back home: from colourful juttis to embroidered kurtas, and from junk jewellery to home décor items. If you have just a day free to yourself, we suggest you go to this market and indulge in some retail therapy.

Once you are done sightseeing, you should make a beeline for the restaurants in Udaipur, many of which serve authentic local cuisines. Your resort can also guide you on any spas and cafes that you would like to visit close by. Be sure to inquire about transport options to take you to faraway spots, and how late you can remain there before you must absolutely return.

Also book a luxury Udaipur resort for a relaxing, comfortable stay. We recommend Club Mahindra’s Kumbhalgarh resort to make your stay extra special. It is part of Club Mahindra’s 61 luxury resorts in India and abroad. Book your stay and inquire how to reach from the airport or nearest railway terminal.

Mahindra Holidays & Resorts India Limited (MHRIL), India’s leading player in the leisure hospitality industry, offers quality family holidays as also stated by Club Mahindra Reviews, primarily through vacation ownership memberships. While Club Mahindra is the flagship brand offering Club Mahindra Memberships, the other brands offered by the company are – Club Mahindra Resorts Fundays and Svaastha Spa. As on Mar 31, 2019, MHRIL has 61+ resorts across India and abroad and its subsidiary, Holiday Club Resorts Oy, Finland, a leading vacation ownership company in Europe has 33 resorts across Finland, Sweden and Spain. Visit us at www.clubmahindra.com