Diu! The name is synonymous with pristine beaches offering endless solitude, far away from the humdrum of city life.

Diu! The name is synonymous with pristine beaches offering endless solitude, far away from the humdrum of city life. It’s a perfect getaway for those who love bathing in the warm sea, walking on clean white sand, or just chilling on the beach and watching the sun go down. 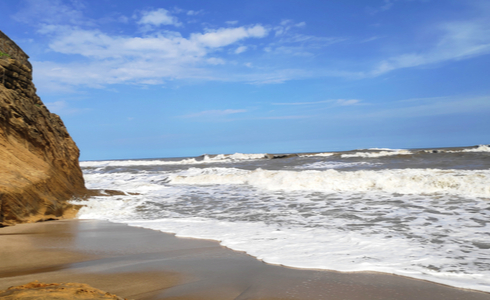 If you love to grab a bite while watching the waves lap against the shore, Nagoa beach will not disappoint. Don’t miss the unique Hoka trees of Portuguese origin found only on this beach in all of India. Their interesting shape provides a great backdrop for photographs.

If you prefer total serenity, head to Jalandhar beach. A few kilometres from Diu airport, this beach is clean, quiet, and safe. Another beach not too far is Chakratirth beach. Catch the sunset, walk along the sands, and meditate if you are so inclined.

It’s not just beaches that are the attraction; there’s a lot more to discover, such as historical monuments. You’ll see them dotted all over the place. 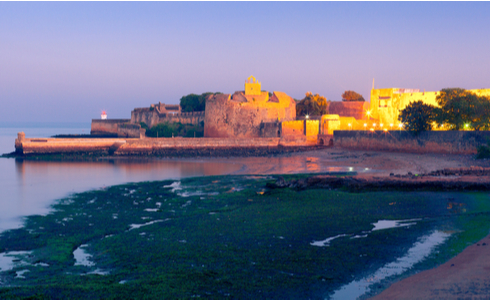 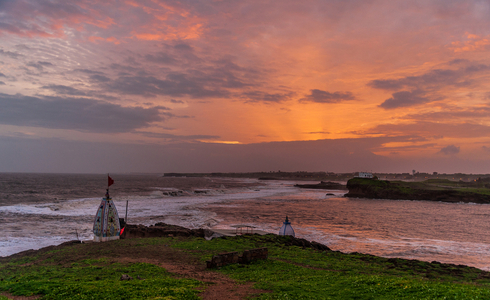 Standing tall and hemmed in on three sides by the expansive Arabian Sea, is Diu Fort. It was built in 1535 by Bahadur Shah, the then Sultan of Gujarat. Cannons can still be found in the fort. One can be seen right above the fort, as if jutting into the sea, designed to ward off enemies approaching via the sea route.

A war memorial for Indian maritime soldiers during the Indo-Pak war of 1971, this has been maintained well. It is a peaceful spot that’s just right to catch the sunset while sitting and contemplating on lives lost for a noble cause. The view is just incredible.

Caves are always intriguing, and these mysterious natural formations are a photographer’s delight. The interplay of light and shade in these caves offers many interesting options for shutterbugs. Witness one of nature’s finest wonders as sunlight streams down and illuminates the caves.

Gangeshwar Mandir in Diu is a cave temple situated right next to the sea. According to ancient mythology, the Pandavas of the Mahabharata worshipped the Shiva deity here. During high tide the sea washes over the deity, which is a sight to behold. The view of the sea is also spectacular from an elevated segment of this temple.

St Paul’s Church dates back to AD 1610, and was built by the Portuguese. It is one of the oldest churches in Diu. The architecture is awe-inspiring. The altar, intricate carvings, and murals create an ambience of supreme tranquillity.

When planning your trip, try to keep it during Diu’s best kept secret, Festa De Diu, Asia’s longest beach festival. It is a musical festival held through the months of December, January and February. If you book early you can pick up tickets at the best prices. Be sure to choose a good hotel for your stay as comfort is paramount.

If you wish to relish time both indoors as much as outdoors, opt for Hotel Kohinoor. A Club Mahindra affiliate property, the architecture bears a Portuguese influence, with large windows and pretty balconies. The staff is courteous, the food delectable, and the cleanliness part of its signature style. Have a splendid time in Diu!